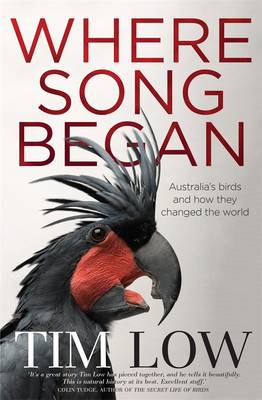 Where Song Began: Australia's Birds And How They Changed TheWorld

Description - Where Song Began: Australia's Birds And How They Changed TheWorld by Tim Low

Tim Low, award-winning author of Feral Future, in an eye-opening book on the unique nature of Australian birds and their role in ecology and global evolution. Renowned for its unusual mammals, Australia is a land of birds that are just as unusual, just as striking, a result of the continent's tens of millions of years of isolation. Compared with birds elsewhere, ours are more likely to be intelligent, aggressive and loud, to live in complex societies, and are long-lived. They're also ecologically more powerful, exerting more influences on forests than other birds. But unlike the mammals, the birds did not keep to Australia; they spread around the globe. Australia provided the world with its songbirds and parrots, the most intelligent of all bird groups. It was thought in Darwin's time that species generated in the Southern Hemisphere could not succeed in the Northern, an idea that was proven wrong in respect of birds in the 1980s but not properly accepted by the world's scientists until 2004 - because, says Tim Low, most ornithologists live in the Northern Hemisphere. As a result, few Australians are aware of the ramifications, something which prompted the writing of this book. Tim Low has a rare gift for illuminating complex ideas in highly readable prose, and making of the whole a dynamic story. Here he brilliantly explains how our birds came to be so extraordinary, including the large role played by the foods they consume (birds, too, are what they eat), and by our climate, soil, fire, and Australia's legacy as a part of Gondwana. The story of its birds, it turns out, is inseparable from the story of Australia itself, and one that continues to unfold, so much having changed in the last decade about what we know of our ancient past. Where Song Began also shines a light on New Guinea as a biological region of Australia, as much a part of the continent as Tasmania. This is a work that goes far beyond the birds themselves to explore the relationships between Australia's birds and its people, and the ways in which scientific prejudice have hindered our understanding. 'Tim Low is the rare author who is able to turn complex and sophisticated research into a form digestible to the general reader without ''dumbing down'' the science . . . A brilliantly readable book that not only gives Australian birds recognition long overdue, but allows for a fresh understanding of the way the world (and particularly our island continent) functions.' Sean Dooley, Sydney Morning Herald 'Low has written a book that is highly informative, but also most readable. Twitchers everywhere will rejoice, but there is also much here that ordinary readers will enjoy. Where Song Began teaches us all a huge amount about our birds - not least that we should be very proud of them. Thoroughly recommended.' Lucy Sussex, Sunday Age 'Stuffed with the fruits of long experience, wide travels (is there anywhere Tim Low hasn't been?) and deep research.' The Saturday Paper 'Esteemed Australian biologist Tim Low tells the incredible story of the origins of global bird life . . . And this story is exciting- ambitious in scope and filled with daring reconstructions of the past, Low's provocative study turns a number of evolutionary assumptions on their heads . . . Low's book will sensitise readers to their bird-filled environments and inject critical insights into ecological pasts and futures.' Lucy Van, Readings Monthly 'If you have an interest in natural history and the environment, read this book and you won't look at Australia in quite the same way again . . . Crammed with intriguing facts and ideas . . . A serious feat of synthesis that few bird observers or natural historians, let alone few authors, would have the knowledge, experience, time or access to academic resources to pull together.' Bob Beale, Sunday Age 'The story

Other Editions - Where Song Began: Australia's Birds And How They Changed TheWorld by Tim Low 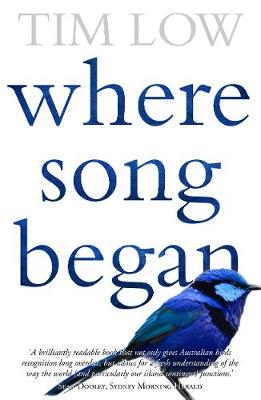 YouTube Videos - Where Song Began: Australia's Birds And How They Changed TheWorld by Tim Low

Tim Low, biologist and author of Where Song Began, chats to John Purcell

Published on 27 Aug 2014 Tim Low is one of Australia's most respected biologists and authors. His latest book Where Song Began, the story of Australia's songbirds, has been one of the word-mouth-hits of the year. He chats with John Purcell about its success and the story behind it.

Book Reviews - Where Song Began: Australia's Birds And How They Changed TheWorld by Tim Low

» Have you read this book? We'd like to know what you think about it - write a review about Where Song Began: Australia's Birds And How They Changed TheWorld book by Tim Low and you'll earn 50c in Boomerang Bucks loyalty dollars (you must be a Boomerang Books Account Holder - it's free to sign up and there are great benefits!)

Tim Low is highly regarded as a biologist and writer. He is the prize-winning author of Feral Future and The New Nature, both published by Penguin, and Wild Food Plants of Australia. He is currently co-editor of Wildlife Australia magazine, to which he has been a long-term contributor. Tim also works as an environmental consultant, and his reports, books, articles and talks have contributed to ecological thought and environmental policy in Australia and more widely. timlow.com