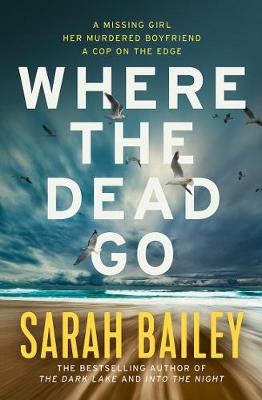 Where the Dead Go

Description - Where the Dead Go by Sarah Bailey

'Every bit as addictive and suspenseful as The Dark Lake ... Sarah Bailey's writing is both keenly insightful and wholly engrossing, weaving intriguing and multi-layered plots combined with complicated and compelling characters.' The Booktopian

A fifteen-year-old girl has gone missing after a party in the middle of the night. The following morning her boyfriend is found brutally murdered in his home. Was the girl responsible for the murder, or is she also a victim of the killer? But who would want two teenagers dead?

The aftermath of a personal tragedy finds police detective Gemma Woodstock in the coastal town of Fairhaven with her son Ben in tow. She has begged to be part of a murder investigation so she can bury herself in work rather than taking the time to grieve and figure out how to handle the next stage of her life - she now has serious family responsibilities she can no longer avoid. But Gemma also has ghosts she must lay to rest.

Gemma searches for answers, while navigating her son's grief and trying to overcome the hostility of her new colleagues. As the mystery deepens and old tensions and secrets come to light, Gemma is increasingly haunted by a similar missing persons case she worked on not long before. A case that ended in tragedy and made her question her instincts as a cop. Can she trust herself again?

A riveting thriller by the author of the international bestseller The Dark Lake, winner of both the Ned Kelly Award and the Sisters in Crime Davitt Award for a debut crime novel.

Other Editions - Where the Dead Go by Sarah Bailey 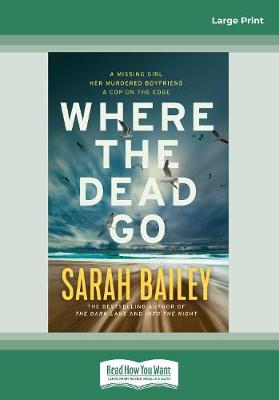 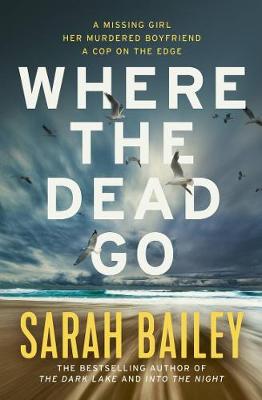 Book Reviews - Where the Dead Go by Sarah Bailey

» Have you read this book? We'd like to know what you think about it - write a review about Where the Dead Go book by Sarah Bailey and you'll earn 50c in Boomerang Bucks loyalty dollars (you must be a Boomerang Books Account Holder - it's free to sign up and there are great benefits!)

4.5?s Where The Dead Go is the third book in the Gemma Woodstock series by award-winning Australian author, Sarah Bailey. After some months working in Sydney, Detective Sergeant Gemma Woodstock is back in her hometown of Smithson to bury her ex-husband. Neither she nor her eight-year-old son, Ben wants to stay in the town with Scott gone, so Gemma impulsively grabs at the opportunity to take on a missing person/murder case at a coastal town near Byron Bay.

Fifteen-year-old Abbey Clark was last seen after leaving a party late on Saturday night. Her father immediately confronted Rick Fletcher, the young man with whom she’d only days earlier broken up. They’d argued loudly at the party, and words had been said. Rick didn’t know where Abbey was, but he was worried about her. On Monday morning, however, Rick’s body was found in his garage.

Gemma takes on the case at this stage because the Chief Inspector at Fairhaven had been injured in a car accident. Her lover back in Sydney is not convinced this is a good move for Gemma: a break to deal with the death of Ben’s main carer is needed, but Mac feels the case is too similar to one they’d failed to satisfactorily resolve in Sydney. It seems that many in the town are blaming Abbey’s violent father, Daniel, scorning the alibi her mother has given him, although a certain British backpacker may also be a suspect.

Setting aside her personal turmoil, Gemma finds her detective skills are challenged by this intriguing case and the lack of evidence. Her work is not made any easier by the fact that the injured Chief Inspector for whom she is standing in is critical of her methods; some of his team display a hostile attitude; a persistent journalist insists she needs to look into certain other matters; and there are threats, some subtle and some less so. Gemma learns that a missing persons case from ten years earlier bears some similarities to this one, and is convinced that illegal drugs are part of the picture.

With each piece of evidence or information uncovered, the team engages in a round of guesswork as they try to apply their new knowledge to the questions they need to answer: Who murdered Rick Fletcher and why? Where is Abbey Clark, and are they searching for a runaway, a captive or a corpse? And are the two cases connected?

Certainly, Gemma Woodstock has matured quite a bit since the reader first encountered her at Smithson in The Dark Lake. She’s no longer indulging in risky personal behaviour, is still conflicted about long-term relationships but is more likeable, and seems to be accepting the position of responsibility as Ben’s primary carer.

Bailey’s depiction of the coastal small town is quite authentic. Fairhaven is filled with secrets and lies and there are a lot of red herrings and distractions in the story resulting in rather too many instances of theorising about who did what to whom and why, some of which might have been condensed for a tighter plot. Despite this, Bailey’s third novel is an excellent piece of Australian crime fiction. This unbiased review is from an uncorrected proof copy provided by Allen & Unwin.

Historical Sketches of Andover, (Comprising the Present Towns of North Andover and Andover)
$121.11 $134.57