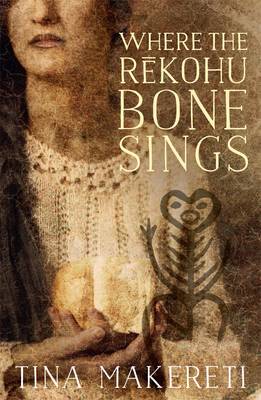 Where the Rekohu Bone Sings

Description - Where the Rekohu Bone Sings by Tina Makereti

From the Chatham Islands/ Rekohu to London, from 1835 to the 21st century, this quietly powerful and compelling novel confronts the complexity of being Moriori, Maori and Pakeha.

From the Chatham Islands/ Rekohu to London, from 1835 to the 21st century, this quietly powerful and compelling novel confronts the complexity of being Moriori, Maori and Pakeha.

In the 1880s, Mere yearns for independence. Iraia wants the same but, as the descendant of a slave, such things are hardly conceivable. One summer, they notice their friendship has changed, but if they are ever to experience freedom they will need to leave their home in the Queen Charlotte Sounds.

A hundred years later, Lula and Bigs are born. The birth is literally one in a million, as their mother, Tui, likes to say. When Tui dies, they learn there is much she kept secret and they, too, will need to travel beyond their world, to an island they barely knew existed.

Neither Mere and Iraia nor Lula and Bigs are aware that someone else is part of their journeys. He does not watch over them so much as through them, feeling their loss and confusion as if it were his own.

Book Reviews - Where the Rekohu Bone Sings by Tina Makereti

» Have you read this book? We'd like to know what you think about it - write a review about Where the Rekohu Bone Sings book by Tina Makereti and you'll earn 50c in Boomerang Bucks loyalty dollars (you must be a Boomerang Books Account Holder - it's free to sign up and there are great benefits!)

A Preview for this title is currently not available.
More Books By Tina Makereti
View All