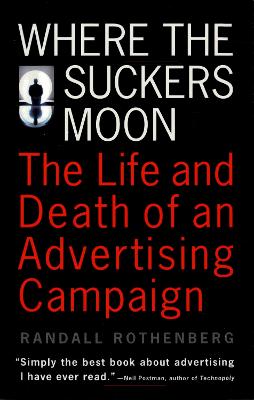 Where The Suckers Moon

Description - Where The Suckers Moon by Randall Rothenberg

"For all the right reasons." "Cars that can." "What to Drive." "The perfect Car for an Imperfect World." Only one of these slogans would be chosen by Subaru of America to sell its cars in the recession year of 1991.

As six advertising agencies scrambled for the account and the winner tried to churn out the Big Idea that would install Subaru in the collective national unconscious, Randall Rothenberg was there, observing every nuance of the chaos, comedy, creativity, and egotism that made up an ad campaign.

One can read Rothenberg's book as the behind-the-scenes chronicle of the brief and very troubled marriage between a beleaguered automobile company and Wieden & Kennedy, an aggressively hip ad agency whose creative director despised cars. One can read it as a history of advertising's journey from the conventionally upbeat slogan "Helps Build Strong Bodies 12 Ways" to the supercool nineties minimalism of "Bo Knows." Either way, Where the Suckers Moon is a face-paced, insightful, and occasionally appalling look at an industry whose obsession with image has affected our entireculture.

Book Reviews - Where The Suckers Moon by Randall Rothenberg

» Have you read this book? We'd like to know what you think about it - write a review about Where The Suckers Moon book by Randall Rothenberg and you'll earn 50c in Boomerang Bucks loyalty dollars (you must be a Boomerang Books Account Holder - it's free to sign up and there are great benefits!)

RANDALL ROTHENBERG is the author of The Neoliberals: Creating the New American Politics. At The New York Times, Rothenberg was the science, politics, and food editor of the Sunday magazine until he left in 1991. Previously, he was a contributing editor at Esquire and wrote extensively for other national magazines. During the writing of this book, he served as a residential Fellow at the Freedom Forum Media Studies Center at Columbia University. He lives with his wife in New York City.