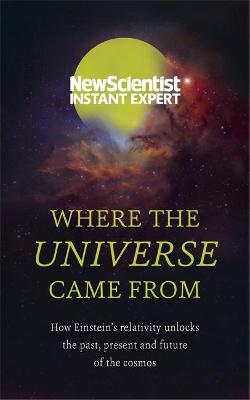 Where the Universe Came From

How Einstein's relativity unlocks the past, present and future of the cosmos

Description - Where the Universe Came From by New Scientist

WHY GENERAL RELATIVITY LEAVES UNFINISHED BUSINESS WITH THE COSMOSA little over a century ago, a young Albert Einstein presented his general theory of relativity to the world and utterly transformed our understanding of the universe. He overturned centuries of thinking about gravity by revealing how it arises from the curvature of space and time. Yet general relativity has had far greater consequences. It has revealed how our universe has been expanding from a hot dense state called the big bang. It has changed our understanding of space and time. And it predicts that the universe is an extreme place, containing black holes and possibly wormholes.Using Einstein's insights, today's cosmologists have come to realise that most of the universe is in the form of mysterious dark energy.In WHERE THE UNIVERSE CAME FROM, leading cosmologists and New Scientist explain that we still have plenty of unfinished business with the cosmos. How does the dark universe shape our cosmic destiny? What is really happening near black holes? Are we any closer to discovering the ripples in space-time predicted by Einstein? Why is relativity not the final answer?ABOUT THE SERIESNew Scientist Instant Expert books are definitive and accessible entry points to the most important subjects in science; subjects that challenge, attract debate, invite controversy and engage the most enquiring minds. Designed for curious readers who want to know how things work and why, the Instant Expert series explores the topics that really matter and their impact on individuals, society, and the planet, translating the scientific complexities around us into language that's open to everyone, and putting new ideas and discoveries into perspective and context.

Buy Where the Universe Came From by New Scientist from Australia's Online Independent Bookstore, Boomerang Books.

Other Editions - Where the Universe Came From by New Scientist Book Reviews - Where the Universe Came From by New Scientist

» Have you read this book? We'd like to know what you think about it - write a review about Where the Universe Came From book by New Scientist and you'll earn 50c in Boomerang Bucks loyalty dollars (you must be a Boomerang Books Account Holder - it's free to sign up and there are great benefits!)

How Your Brain Works: Inside the most complicated object in the known universe
$19.31 $22.99

Where the Universe Came From: How Einstein's relativity unlocks the past, present and future of the cosmos
$19.31 $22.99

The End of Money: The story of bitcoin, cryptocurrencies and the blockchain revolution
$19.31 $22.99