'ADVENTUROUS AND OUTLANDISH, WHIMSY AND WOE WILL HOOK KIDS IN FROM THE FIRST PAGE.'

- Books+Publishing on Whimsy and Woe

As a blazing inferno rages through Whitby City, Whimsy and Woe Mordaunt see their last clue go up in flames and their journey to find their parents has seemingly come to a fiery end. That is until the siblings spot a very familiar man in the crowd . . .

In the final act to this dramatic tale, Whimsy and Woe must escape villainous thieves, travel beneath a desert, climb the Mountainous Mountains and perform a death-defying trapeze act in the Benton Brothers Circus . . . all before going undercover at the annual Thespian Society Masquerade Ball.

PRAISE FOR WHIMSY AND WOE

'Whimsy and Woe has it all: incredibly courageous children (hooray!), an evil calculating aunt, the ignominious Ignatius Solt (boo!) and a despicable one-legged pirate (hiss!), captivity and misery in a boarding house populated by an outlandish clientele (gasp!) and a heroic escape from a treacherous storm, imprisonment in a swamp and a wolf with razor-sharp teeth ... all told with vivid thespian style and flair.' - Readings

'Rebecca McRitchie knows what young readers want. McRitchie delivers a fun, energetic read in her debut children's fiction title; it is perfect for fans of Judith Rossell's Withering-by-Sea and Lemony Snicket's 'A Series of Unfortunate Events'. With non-stop plot twists, Whimsy and Woe has the ability to keep the attention of reluctant readers who will want to know what happens next.' - Books+Publishing, four stars

'Written in a style wonderfully akin to Lemony Snicket, the quaint language and eccentric characters will capture your imagination and keep you up reading late into the night.' - Goodreads review

Other Editions - Whimsy and Woe by Rebecca McRitchie 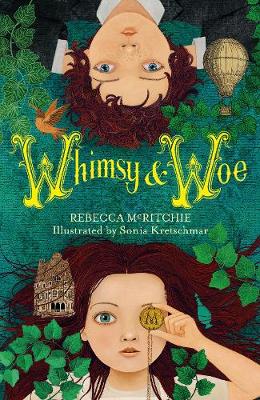 » Have you read this book? We'd like to know what you think about it - write a review about Whimsy and Woe book by Rebecca McRitchie and you'll earn 50c in Boomerang Bucks loyalty dollars (you must be a Boomerang Books Account Holder - it's free to sign up and there are great benefits!)