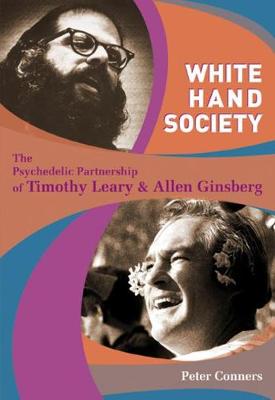 In 1960 Timothy Leary was not yet famous - or infamous - and Allen Ginsberg was both. Leary, eager to expand his experiments at the Harvard Psilocybin Project to include accomplished artists and writers, knew that Ginsberg held the key to bohemia's elite. Ginsberg, fresh from his first experience with hallucinogenic mushrooms in Mexico, was eager to promote the spiritual possibilities of psychedelic use. Thus, "America's most conspicuous beatnik" was recruited as Ambassador of Psilocybin under the auspices of an Ivy League professor, and together they launched the psychedelic revolution and turned on the hippie generation.

White Hand Society weaves a fascinating and entertaining tale of the life, times and friendship of these two larger-than-life figures and the incredible impact their relationship had on America. Peter Conners has gathered hundreds of pages of letters, documents, studies, FBI files, and other primary resources that shed new light on their relationship, and a veritable who's who of artists and cultural figures appear along the way, including Jack Kerouac, William Burroughs, Thelonious Monk, Willem de Kooning, and Barney Rosset. The story of the "psychedelic partnership" of two of the most famous, charismatic and controversial members of America's counterculture brings together a multitude of major figures from politics, the arts, and the intersection of intellectual life and outlaw culture in a way that sheds new light on the dawn of the 1960s.

"Through the years City Lights has brought us seminal work by Allen Ginsberg, Gregory Corso, and now, this detail-rich double bio of Allen Ginsberg and Timothy Leary. I knew both these men pretty well, and the times intimately, and Peter Conners has been true to it all. I don't know how he amassed the trunks of data he must have used to find the jillions of details which were new to me, but I'm certainly glad that he did. This book wins a well deserved spot on my shelf, and belongs with anyone who wants an intimate view of the Sixties-Seventies spinning of the Great Wheel of the Dharma." -Peter Coyote, actor/author, Sleeping Where I Fall

"Peter Conners has given us a wondrous tale of picaresque adventure and authentic friendship - between Leary the trickster-explorer-scientist and Ginsberg the activist-bard-philosopher, two seminal figures who pioneered new pathways through the cultural maelstrom of the sixties."-Ralph Metzner, co-author, with Ram Dass & Gary Bravo, of Birth of a Psychedelic Culture

"The Psychedelic Revolution of the Sixties began with the meeting of two visionary explorers into the unmapped regions of inner consciousness - Timothy Leary and Allen Ginsberg. In the White Hand Society Peter Conners charts the course from the earliest dirt roads of laughing gas to the superhighways of LSD in one compelling story. It is a thrilling ride on what Ginsberg called the Trackless Transit System, going where no one else had dared venture. Take this as a new kind of guidebook into the mystery of the mind." -Bill Morgan, author of Beat Atlas: A State by State Guide to the Beat Generation in America and The Typewriter Is Holy: The Complete, Uncensored History of the Beat Generation

"Peter Conners' White Hand Society is a gripping account of a key event in 20th Century history, the decision to actively promote strong psychedelics to the population at large. Conners tells the Timothy Leary story from the traditional perspective of the West Coast counterculture, but he emphasizes the egalitarian influence that the Beat movement had on him and, in particular, the huge Blakean personality of Allen Ginsberg. The result is a portrait of two remarkable figures who came together and changed our culture forever." -John Higgs

» Have you read this book? We'd like to know what you think about it - write a review about White Hand Society book by Peter Conners and you'll earn 50c in Boomerang Bucks loyalty dollars (you must be a Boomerang Books Account Holder - it's free to sign up and there are great benefits!)

Peter Conners is author of the memoir, Growing Up Dead: The Hallucinated Confessions of a Teenage Deadhead (Da Capo Press, 2009). His other books include the prose poetry collection Of Whiskey and Winter and the novella Emily Ate the Wind. His next poetry collection, The Crows Were Laughing in their Trees, is forthcoming from White Pine Press in spring 2011. He is also editor of PP/FF: An Anthology which was published by Starcherone Books in April 2006. His writing appears regularly in such journals as Poetry International, Mississippi Review, Brooklyn Rail, Fiction International, Salt Hill, Hotel Amerika, Mid-American Review, The Bitter Oleander, and Beloit Fiction Journal and will be included in the Forty Under Forty poetry anthology forthcoming from Yale University Press.

A Preview for this title is currently not available.
More Books By Peter Conners
View All