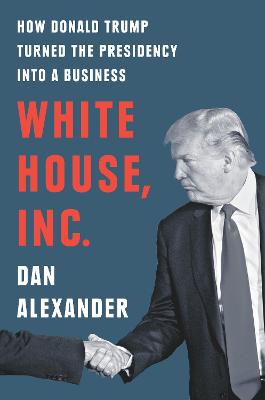 White House, Inc.: How Donald Trump Turned the Presidency into a Business

Description - White House, Inc.: How Donald Trump Turned the Presidency into a Business by Dan Alexander

By holding onto his businesses, Donald Trump launched an unprecedented experiment- What happens to a multi-billion-dollar business when its leader ascends to the presidency of the United States? And more importantly, what happens to the United States? White House, Inc. is the definitive book on money and politics in the Trump era. It examines every aspect of the president's portfolio- his exclusive clubs, D.C. hotel, overseas partnerships, commercial properties, personal mansions and private planes.

It also investigates Trump associates. The president's disregard for norms set the tone at the top of the federal government, sparking a trickle-down ethics crisis with no precedent in modern American history. Trump appointed an inner circle of centimillionaires and billionaires--including Jared Kushner, Wilbur Ross and Carl Icahn--who all arrived in Washington with their own conflict-ridden portfolios. With the president as their guide, they busted through barriers meant to separate their financial holdings from their government roles.

Alexander tracks hundreds of millions flowing freely between big businesses and President Trump. He explains, in plain language, how Donald Trump bought and sold the presidency. In the tradition of game-changing political exposes like Dark Money, White House, Inc. represents the most complete financial account of the Trump presidency.

» Have you read this book? We'd like to know what you think about it - write a review about White House, Inc.: How Donald Trump Turned the Presidency into a Business book by Dan Alexander and you'll earn 50c in Boomerang Bucks loyalty dollars (you must be a Boomerang Books Account Holder - it's free to sign up and there are great benefits!)


A Preview for this title is currently not available.
More Books By Dan Alexander
View All