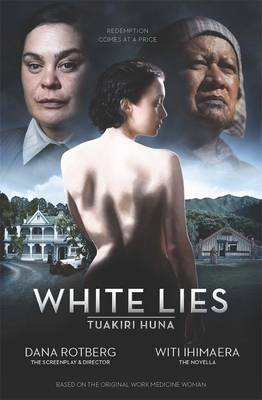 A powerful, prize-winning novella from the much-loved author of The Whale Rider, plus a moving screenplay, film stills and commentary on writing and movie making.

A medicine woman - a giver of life - is asked to hide a secret that may protect a position in society, but could have fatal consequences. When she is approached by the servant of a wealthy woman, three very different women become players in a head-on clash of beliefs, deception and ultimate salvation.

This compelling story tackles moral dilemmas, exploring the nature of identity, societal attitudes to the roles of women and the tension between Western and traditional Maori medicine. This book, though, is also about the richness of creativity, illustrating the way a single story can take on different lives. The original novella, Medicine Woman, has been rewritten and expanded by Witi Ihimaera to become White Lies. It has also evolved into a screenplay by internationally acclaimed director and screenwriter Dana Rotberg, which has been made into a superb film by South Pacific Pictures. Thus this book offers an intriguing insight into the process of adapting work, as well as offering new versions of this potent story.
Nga Kupu Ora - Aotearoa Maori Book Awards 2013, winner of the Te Pakimaero / Fiction category

» Have you read this book? We'd like to know what you think about it - write a review about White Lies book by Witi Ihimaera and you'll earn 50c in Boomerang Bucks loyalty dollars (you must be a Boomerang Books Account Holder - it's free to sign up and there are great benefits!)