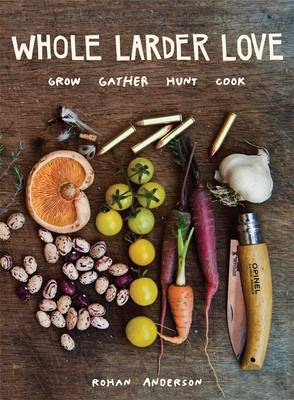 Rohan Anderson is a family man, a talented DIY-er and a modern-day hunter-gatherer. Primarily concerned with how to live off the land and provide himself and his family with fresh, local food, Anderson has become and expert hunter, fisher, forager, gardener, pickler and sometimes barterer. He now shares his healthy and sustainable secrets and experiences. In Whole Larder Love, Anderson gives us delectable recipes, easy-to-follow gardening, foraging and hunting tips, and guidance on the proper tools, gear and resources to use. 'Fans of Rohan Anderson's blog Whole Larder Love will take a shine to his first book, which is alive with evocative images of rural life.' The Age 'For anyone wanting a greater connection to the land, it is a must for the bookshelf.' Weekly Times 'The book takes you into Rohan's world, and his own beautiful photos - not only of meals but also of kit for growing, gathering and hunting - complement the simple recipes that are easy and full of flavour.' Good Reading For more visit wholelarderlove.com and facebook.com/wholelarderlove » Have you read this book? We'd like to know what you think about it - write a review about Whole Larder Love book by Rohan Anderson and you'll earn 50c in Boomerang Bucks loyalty dollars (you must be a Boomerang Books Account Holder - it's free to sign up and there are great benefits!)

Rohan Anderson is a modern-day food warrior. Raised on a small farm in rural Victoria, Anderson developed not only an affinity for nature, but also an understanding and appreciation of the role nature plays in providing sustenance. Anderson has taken these lessons into his adult life where he now grows, hunts, fishes and forages in wild and urban surrounds to feed his family. He also documents his adventures through photography, sharing his recipes, slow food philosophies and sometimes contentious views on his hugely popular blog, Whole Larder Love. Describing himself not as a chef, but rather a family cook, Anderson is influenced by rustic, peasant-style cooking, with minimal fuss involved. It's unlikely that you'll find Anderson at the supermarket; instead he is usually wandering around his garden, strolling through forests, foraging for wild mushrooms, hunting in paddocks, and fishing in cool mountain streams.

A Preview for this title is currently not available.
More Books By Rohan Anderson
View All