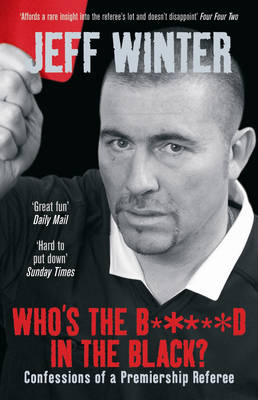 Confessions of a Premiership Referee

Description - Who's the B*****d in the Black? by Jeff Winter

During his career in the Premiership, Jeff Winter became one of our most high-profile referees - regularly called upon to take action while 40,000 fans screamed abuse at him. Since breaking ties with the FA, Jeff is now free to reveal the true referee experience with utter candidness- his dealings with the most controversial and volatile players, and his famous bust-ups with Sir Alex Ferguson, Sam Allardyce and others. It is a sensational tale, packed with insight and laced with wry humour.It is also the story of how Jeff transformed himself from terrace boot-boy to lawman on the pitch- a journey of hard knocks and comic episodes as he progressed through the lower leagues to the very top. It is quite simply the most honest account of refereeing ever written.'Back to your usual self, Jeff, fucking useless' - Sir Alex Ferguson'He drives me nuts. An absolute prat - and you can print that as well' - Steve Bruce'I'll get the sack soon enough. Perhaps I'll send Jeff a note when the P45 arrives' - Martin O'Neill

Buy Who's the B*****d in the Black? by Jeff Winter from Australia's Online Independent Bookstore, Boomerang Books.

» Have you read this book? We'd like to know what you think about it - write a review about Who's the B*****d in the Black? book by Jeff Winter and you'll earn 50c in Boomerang Bucks loyalty dollars (you must be a Boomerang Books Account Holder - it's free to sign up and there are great benefits!)

Jeff Winter's career as a referee spanned some 25 years. His relationship with the FA came to an end when he left his post as a match assessor, after openly criticising managers Alex Ferguson and Ars ne Wenger. Since then he has been a much sought-after pundit, regular guest on Sky and BBC Five Live, and host of his own weekly show on radio station TFM Teesside. He continues to court controversy wherever he goes, and has been banned by managers Steve Bruce and Sam Allardyce from their clubs' respective grounds for his comments. Jeff lives in Cleveland with his second wife, Lynette. He has two sons and a daughter from his first marriage.