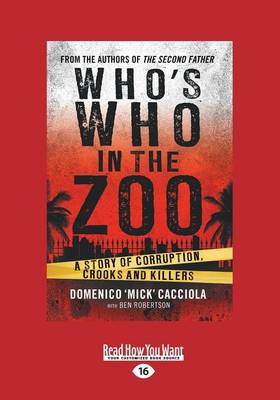 Who's Who in the Zoo

More incredible stories from the authors of the best - selling The Second Father: An Insider's Story of Cops, Crime and Corruption. Who's Who in the Zoo is a first - hand account of Domenico 'Mick' Cacciola's life as a CIB and Special Branch detective over three decades. It captures the colour and grit of policing in Brisbane's Fortitude Valley, which in its heyday was the sleazy epicentre of gambling and prostitution. Be transported to the pre - and post - Fitzgerald Inquiry eras: the crooked cops, the corrupt politicians, the stand - over men, the informants, the bank robbers, the drugs, the murderers, the crime and the violence. From making the arrest in Australia's first televised siege (the hijacking of the Seaworld helicopter) to being expected to chauffeur Commissioner Terry Lewis's mother around, Cacciola has done - and seen - it all. He held a gun to the head of a hitman contracted by the Griffith mafia to kill Cacciola himself and grasped desperately as a woman trying to suicide off a bridge slipped from his fingers. Always an honest cop, Cacciola was told to turn a blind eye to the gambling and prostitution rife in the Valley.
He did as he was told, for a while anyway a| Just as the bestselling Three Crooked Kings captured a nation's interest, this in - your - face true - crime book will enthral.

Buy Who's Who in the Zoo by Domenico `Mick' Cacciola and Ben Robertson from Australia's Online Independent Bookstore, Boomerang Books.

» Have you read this book? We'd like to know what you think about it - write a review about Who's Who in the Zoo book by Domenico `Mick' Cacciola and Ben Robertson and you'll earn 50c in Boomerang Bucks loyalty dollars (you must be a Boomerang Books Account Holder - it's free to sign up and there are great benefits!)