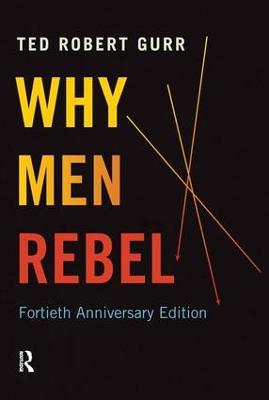 Why Men Rebel was first published in 1970 after a decade of political violence across the world. Forty years later, serious conflicts continue in Africa, Asia and the Middle East. Ted Robert Gurr reintroduces us to his landmark work, putting it in context with the research it influenced as well as world events. Why Men Rebel remains highly relevant to today's violent and unstable world with its holistic, people-based understanding of the causes of political protest and rebellion. With its close eye on the politics of group identity, this book provides new insight into contemporary security challenges.

Other Editions - Why Men Rebel by Ted Robert Gurr » Have you read this book? We'd like to know what you think about it - write a review about Why Men Rebel book by Ted Robert Gurr and you'll earn 50c in Boomerang Bucks loyalty dollars (you must be a Boomerang Books Account Holder - it's free to sign up and there are great benefits!)

Ted Robert Gurr is former Director of the Minorities at Risk Project and Emeritus Distinguished University Professor in the Department of Government & Politics at the University of Maryland. He is author of numerous books and articles including Peoples vs. States: Minorities at Risk in the New Century (2000).

A Preview for this title is currently not available.
More Books By Ted Robert Gurr
View All

Crime-Terror Alliances and the State: Ethnonationalist and Islamist Challenges to Regional Security
$90.08 $90.99