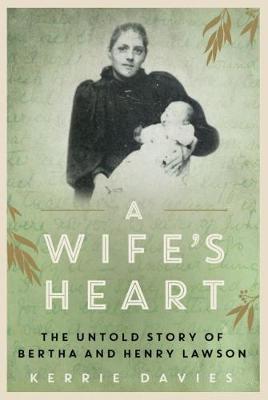 A Wife's Heart: The Untold Story of Bertha and Henry Lawson

Description - A Wife's Heart: The Untold Story of Bertha and Henry Lawson by Kerrie Davies

An innovative, imaginative work of biography, examining Bertha and Henry Lawson's marriage through a modern lens

Henry Lawson is a revered cultural icon, but despite his literary success he descended into poverty and an early death. While many blamed his wife for his decline, Bertha Lawson alleged in April 1903 that Henry was habitually drunk and cruel, leading her to demand a judicial separation.
In A Wife's Heart, Kerrie Davies provides a rare account of this tumultuous relationship from Bertha's perspective, in an era when women's rights were advancing considerably. Reproducing the Lawsons' letters - some of which have never been published - alongside her personal reflections, Davies explores the couple's courtship, marriage and eventual separation, as Bertha struggled to raise their two children as a single parent.
A Wife's Heart offers an intimate portrait of the Lawsons' marriage, examined through a modern lens. It is an innovative, imaginative work of biography that reflects on the politics of relationships and the enduring complexities of love.

Book Reviews - A Wife's Heart: The Untold Story of Bertha and Henry Lawson by Kerrie Davies

» Have you read this book? We'd like to know what you think about it - write a review about Wife's Heart: The Untold Story of Bertha and Henry Lawson book by Kerrie Davies and you'll earn 50c in Boomerang Bucks loyalty dollars (you must be a Boomerang Books Account Holder - it's free to sign up and there are great benefits!)

Kerrie Davies is a journalist and media academic at UNSW. She has written for Collective magazine, Elle, Vogue Australia, and The Weekend Australian Magazine, among other media outlets. She is completing her Doctor of Arts (Literary Journalism) at the University of Sydney and is co-author of the Colonial Australian Literary Journalism Database.

A Preview for this title is currently not available.
More Books By Kerrie Davies
View All