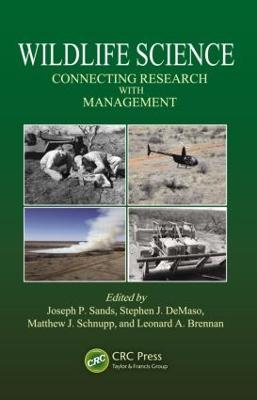 Despite the potential synergy that can result from basing management applications on results from research, there is a polarization of cultures between wildlife managers and wildlife researchers. Wildlife Science: Connecting Research with Management provides strategies for bridging cultural and communication gaps between these groups.

Contributors present case studies highlighting the role of state and federal agencies and private organizations in management and research; the lingering disconnects between grassland birds, quail, and deer research and management; as well as the development of management techniques from field research, rangelands management, and ranch management. 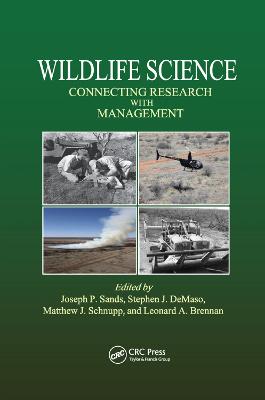 » Have you read this book? We'd like to know what you think about it - write a review about Wildlife Science book by Joseph P. Sands and you'll earn 50c in Boomerang Bucks loyalty dollars (you must be a Boomerang Books Account Holder - it's free to sign up and there are great benefits!)

Joseph P. Sands Originally from Days Creek, Oregon, Joseph received an Honors Bachelor of Science from Oregon State University (2004), and a M.S. (2007) and Ph.D. (2010) from Texas A&M University-Kingsville. Joseph worked as a Research Assistant and Research Associate for the Caesar Kleberg Wildlife Research Institute (CKWRI) at Texas A&M University-Kingsville from June 2004 to September 2011. At the time of publication, Joseph was the Migratory Game Bird, Small Game and Wild Turkey Program Coordinator for the New Mexico Department of Game and Fish in Santa Fe. Stephen J. DeMaso Stephen J. DeMaso is the monitoring coordinator for the Gulf Coast Joint Venture in Lafayette, Louisiana. Prior to moving to Louisiana, he worked as a research scientist at the CKWRI at Texas A&M University-Kingsville in Kingsville, Texas; upland game bird program leader for the Texas Parks and Wildlife Department in Austin, Texas; and the Oklahoma Department of Wildlife Conservation where he served as the lead researcher on the nationally recognized Packsaddle quail research project. He is a member of the Louisiana, Texas, and National Chapters of The Wildlife Society. Steve has served as the book review editor for the Journal of Wildlife Management and previously served as the program chairman and editor for the Proceedings of the Fifth National Quail Symposium. Steve was raised in southern Michigan and received his B.S. from Michigan State University, M.S. from Texas A&M University-Kingsville, and his Ph.D. from Texas A&M University. Matthew J. Schnupp Matthew Schnupp was born and raised in Wheeling, West Virginia. He attended West Virginia University where he graduated in 2005 with a degree in Wildlife and Fisheries Science. Matthew has been part of various research projects in West Virginia, South Carolina, Montana, and Wyoming. In the fall of 2009 he graduated with a Masters in Wildlife and Range Science from CKWRI at Texas A&M University-Kingsville. During his tenure at CKWRI, Matthew studied abroad at the Centre for Research into Ecological and Environmental Modelling and received the Clarence Cottam Award for his outstanding student research efforts. Matthew was hired in October 2008 as the King Ranch Santa Gertrudis Heritage Society Biologist. Matthew is currently the wildlife biologist for over 200,000 acres of King Ranch and the wildlife research liaison between King Ranch and various universities, private organizations, and government entities. Leonard A. Brennan Lenny Brennan grew up in Connecticut and earned a B.S. from The Evergreen State College in Olympia Washington, an M.S. from Humboldt State University in Arcata, California, and a Ph.D. from the University of California, Berkeley. He was Editor-in-Chief (2001- 2002), and is currently Associate Editor (2005 - present) of The Journal of Wildlife Management. He chaired the Technical Support Committee for the Texas Quail Council (2003- 2006). He is editor of the book Texas Quails: Ecology and Management published by Texas A&M University Press, which received the 2008 Outstanding Edited Book Award from The Wildlife Society, the 2007 Special Category Publication Award from the Texas Section of the Society for Range Management, and the 2007 Outstanding Edited Book Award from the Texas Chapter of The Wildlife Society. Lenny has authored or coauthored more than 125 scientific publications and more than 90 extension and magazine articles.

A Preview for this title is currently not available.
More Books By Joseph P. Sands
View All