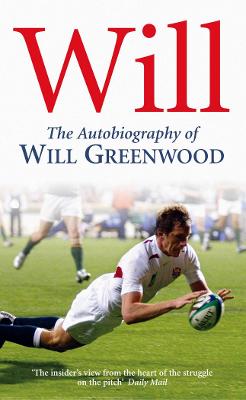 The Autobiography of Will Greenwood

Description - Will by Will Greenwood

The autobiography of the most outspoken member of the English rugby team explores the highs and lows of his remarkable life in rugby, and his eventful life off the pitch.

Known as Shaggy to his mates, Greenwood is one of the sport's most engaging, intelligent, outspoken and witty characters. A Lancastrian to the tips of this size 12 boots, the giant centre has been and automatic choice in the England XV since his debut against Australia in 1997. A few months earlier he looked set to become only the third uncapped Englishman to play for the British Lions when he came within a whisker of losing his life after he was speared to the ground in a heavy tackle, lost consciousness and swallowed his tongue. After taking several months to recover he quickly made and impact at international level following a widespread clamour in the press for his call-up to the England side. An elegant riposte to the old jibe that England players lack guile and imagination, the Harlequins' and former Leicester centre has brought a shimmering, magical quality to his team's back play, opening up defences with clever angled running, superb distribution and a gravity-defying ability to stay up in the tackle. Greenwood also featured in England's doomed World Cup campaign in 1999 before playing a central role in the team's dramatic triumph in Australia four years later. His life off the pitch has been no less eventful, he and his wife Caro having experienced extreme despair and joy in recent years with the loss of one son, Freddie, and the birth of another, Archie. Greenwood takes time to reflect in this revealing, honest, funny and moving book.

Buy Will by Will Greenwood from Australia's Online Independent Bookstore, Boomerang Books.

Book Reviews - Will by Will Greenwood

» Have you read this book? We'd like to know what you think about it - write a review about Will book by Will Greenwood and you'll earn 50c in Boomerang Bucks loyalty dollars (you must be a Boomerang Books Account Holder - it's free to sign up and there are great benefits!)

Will Greenwood is an international rugby star who has 52 caps, and has scored 30 test tries. He is a graduate of Economics from Durham University and currently plays for NEC Harlequins. He lives in South West London with his wife and their son Archie.

A Preview for this title is currently not available.
More Books By Will Greenwood
View All