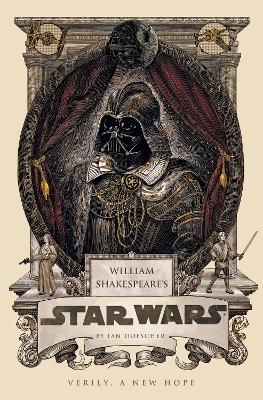 May the verse be with you!

May the verse be with you! Inspired by one of the greatest creative minds in the English language-and William Shakespeare-here is an officially licensed retelling of George Lucas's epic Star Wars in the style of the immortal Bard of Avon. The saga of a wise (Jedi) knight and an evil (Sith) lord, of a beautiful princess held captive and a young hero coming of age, Star Wars abounds with all the valor and villainy of Shakespeare's greatest plays. Reimagined in glorious iambic pentameter, William Shakespeare's Star Wars will astound and edify learners and masters alike. Zounds! This is the book you're looking for. » Have you read this book? We'd like to know what you think about it - write a review about William Shakespeare's Star Wars book by Ian Doescher and you'll earn 50c in Boomerang Bucks loyalty dollars (you must be a Boomerang Books Account Holder - it's free to sign up and there are great benefits!)

Ian Doescher the author of William Shakespeare's Star Wars - Verily, a New Hope. He lives with his family in Portland, Oregon. Nicolas Delort is a freelance illustrator based in Paris, France. Gathering inspiration in the daily and mundane as well as books and any kind of narrative medium, Delort has been compared to Gustav Dore and Franklin Booth for his "wonderfully textural" pen-and-ink drawings of scenes both fantastical and familiar. Delort's work has been featured on the cover of "Magic- An Anthology of the Esoteric and Arcane" from Solaris Books and in several galleries worldwide.