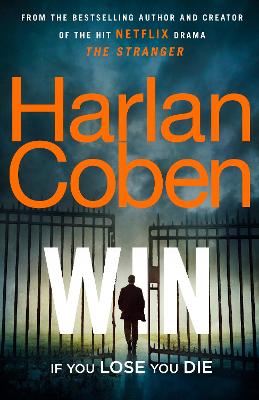 Win: New from the #1 bestselling creator of the hit Netflix series The Stranger

Description - Win: New from the #1 bestselling creator of the hit Netflix series The Stranger by Harlan Coben

____________________________
From the #1 bestselling author and creator of the hit Netflix series The Stranger comes a riveting new thriller, starring the new hero Windsor Horne Lockwood III - or Win, as he is known to his (few) friends .
____________________________
Over twenty years ago, heiress Patricia Lockwood was abducted during a robbery of her family's estate, then locked inside an isolated cabin for months. Patricia escaped, but so did her captors, and the items stolen from her family were never recovered.

On New York's Upper West Side, a recluse is found murdered in his penthouse apartment, alongside two objects of note- a stolen Vermeer painting and a leather suitcase bearing the initials WHL3. For the first time in years, the authorities have a lead not only on Patricia's kidnapping but also on another FBI cold case - with the suitcase and painting both pointing them towards one man.

Windsor Horne Lockwood III - or Win as his few friends call him - doesn't know how his suitcase and his family's stolen painting ended up in this dead man's apartment. But he's interested - especially when the FBI tell him that the man who kidnapped his cousin was also behind an act of domestic terrorism, and that he may still be at large.

The two cases have baffled the FBI for decades. But Win has three things the FBI does not-- a personal connection to the case, a large fortune, and his own unique brand of justice ...

Other Editions - Win: New from the #1 bestselling creator of the hit Netflix series The Stranger by Harlan Coben Book Reviews - Win: New from the #1 bestselling creator of the hit Netflix series The Stranger by Harlan Coben

» Have you read this book? We'd like to know what you think about it - write a review about Win: New from the #1 bestselling creator of the hit Netflix series The Stranger book by Harlan Coben and you'll earn 50c in Boomerang Bucks loyalty dollars (you must be a Boomerang Books Account Holder - it's free to sign up and there are great benefits!)

Book Review: Win: New from the #1 bestselling creator of the hit Netflix series The Stranger by Harlan Coben - Reviewed by CloggieA (13 Feb 2021)

Win is the first book in the Windsor Horne Lockwood III series by award-winning best-selling American author, Harlan Coben. When two FBI agents escort Win to an exclusive New York penthouse, he’s already puzzled, but when he enters what is clearly the home of a hoarder, apparently murdered, and is shown a Vermeer painting on a bedroom wall, he is stunned. It is one of two valuable paintings stolen from his family over twenty years ago while on loan to the family’s alma mater.

Even more perplexing is the other item in the bedroom, which ties the scene to the murder, also over twenty years earlier, of his estranged uncle and the abduction of his cousin. Win’s erstwhile FBI handler, PT suggests he investigate because “The FBI will have to play this strictly by the rules… you don’t, (and) you get to stay involved and protect the interest of your family and more specifically your cousin.” Win gets to use FBI resources and his own.

PT reveals that the dead hoarder was one of the Jane Street Six, a notorious group of New York college student whose action with Molotov cocktails, in the early 1970s, unintentionally resulted in a number of deaths. Clearly, finding any survivors of the remaining five should be Win’s first priority. But there are others hunting for them, not the least of these a local mob family.

Win’s investigations lead him on a merry chase, not all of it legal but “I realize that impersonating an officer is breaking the law, but here is the thing about being rich: You don’t go to jail for crimes like this. The rich hire a bunch of attorneys who will twist reality in a thousand different ways until reality is made irrelevant.”

There are plenty of red herrings and diversions for the reader and the final twist is excellent. Readers of Coben’s Myron Bolitar series will be familiar with Win, and perhaps have instant affection for this rather cocky and insanely wealthy man whose arrogance occasionally spurs him into what he prefers to call “preventive offense” rather than vigilantism, although at a certain point he has to admit “Perhaps I was wrong. I’m not infallible” especially when his actions land him in the ICU for a few days.

But “I also have a tremendous ego. I don’t do things that I’m not good at. I’m a very good golfer, a very good financial consultant, a very good fighter, and a very good lover. If I do something, I want to be the best.” Definitely an entertaining read. This unbiased review is from an uncorrected proof copy provided by NetGalley and Random House UK.


A Preview for this title is currently not available.
More Books By Harlan Coben
View All