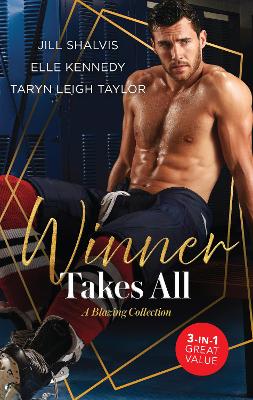 NHL coach Mark Diego is spending the off season in his hometown coaching teenage girls. However, he didn't expect to be working with Rainey Saunders, his childhood friend - and the woman he's always had a thing for. Unfortunately, they don't see eye-to-eye. And when their tempers flare, Mark and Rainey discover their fireworks don't just burn angry - they burn very, very hot!

The moment hockey star Brody Croft first sees good-girl Hayden Houston at the bar, he's riveted. Brody's ready to shed his bad-boy ways for the sexy brunette and settle down. And after a mind-blowing night in bed with Hayden, he knows she's the one. Now all he has to do is convince her that he's her one...

Sports reporter Holly Evans just scored a career-changing stint, documenting a hockey team's first run in the playoffs. But instead of investigating possible corruption on the team, she's doing fluff pieces about the players! Which brings her up close and personal with the team captain, Luke Maguire.

Luke suspects Holly is hiding something and is determined to find out her secrets. But when their sexy game of cat and mouse catches them off-side, there's no telling what the penalty will be...

» Have you read this book? We'd like to know what you think about it - write a review about Winner Takes All: A Blazing Collection/Time Out/Body Check/Playing to Win book by Jill Shalvis and you'll earn 50c in Boomerang Bucks loyalty dollars (you must be a Boomerang Books Account Holder - it's free to sign up and there are great benefits!)


A Preview for this title is currently not available.
More Books By Jill Shalvis
View All