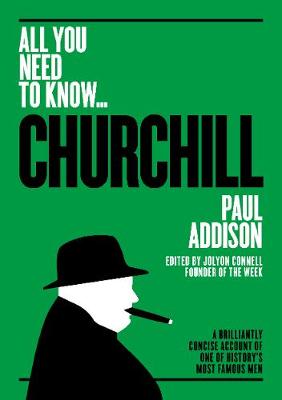 Winston Churchill: A Brilliantly Concise Account of One of History's Most Famous Men

Description - Winston Churchill: A Brilliantly Concise Account of One of History's Most Famous Men by Paul Addison

In his day Winston Churchill was one of the most famous human beings who ever lived. In 1945 most people in the world would have seen his name in the headlines, heard the latest news of him on the radio or seen his face beaming or glowering in the newsreels. His funeral in 1965 is said to have been watched on television by 350 million people around the globe. Those days are long gone, and the massed ranks of his contemporaries have been scythed away leaving only a few who remember him as a living presence. But of all the politicians of the 20th century, he is the only one to have inspired an apparently never-ending cascade of books, articles and documentaries. Part of the explanation lies in the fact that his place in our past is still in dispute. He is as controversial today as he was for much of his lifetime, and most of those who study him fall into one of two camps: pro or ante. Neutrality and indifference are rare. In this book Paul Addison, who has been studying Churchill for 40 years, weighs the arguments, looking at both the pro and anti Churchill case, but concluding not only that he was a great man but that his life was one of the most astonishing and fortunate accidents in world history.

Book Reviews - Winston Churchill: A Brilliantly Concise Account of One of History's Most Famous Men by Paul Addison

» Have you read this book? We'd like to know what you think about it - write a review about Winston Churchill: A Brilliantly Concise Account of One of History's Most Famous Men book by Paul Addison and you'll earn 50c in Boomerang Bucks loyalty dollars (you must be a Boomerang Books Account Holder - it's free to sign up and there are great benefits!)