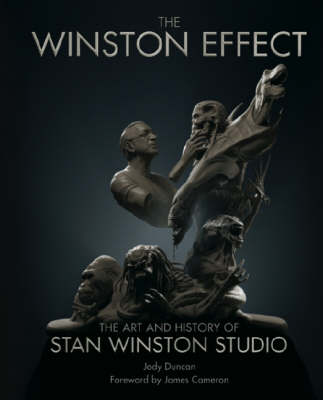 For over 30 years, Stan Winston and his team of artists and technicians have been creating characters, creatures and monsters for the silver screen, from "The Terminator" and the extraterrestrial monstrosities of "Aliens" and "Predator" to the amazing dinosaurs of "Jurassic Park" and the fanciful character of "Edward Scissorhands". Now, at last, he's opening up the Stan Winston Studios to collaborate on the first-ever book to reveal all the behind-the-scenes secrets of his groundbreaking and hugely influential artistry and effects work. Featuring an extensive array of sketches, production art, and photographs straight from the studio archives, this is the book his fans have been waiting for! » Have you read this book? We'd like to know what you think about it - write a review about Winston Effect book by Jody Duncan and you'll earn 50c in Boomerang Bucks loyalty dollars (you must be a Boomerang Books Account Holder - it's free to sign up and there are great benefits!)

Stan Winston is the world's foremost creator of make-up, creature and character designs. The winner of four Academy Awards[registered], three British Academy of Film and Television Arts Awards, two Emmys and numerous other industry awards, Winston originally came to Hollywood to become an actor. While looking for work in 1969, he became a make-up apprentice at Disney Studios - a "day job" that quickly evolved into a stellar career, encompassing commercials, television and film.

A Preview for this title is currently not available.
More Books By Jody Duncan
View All