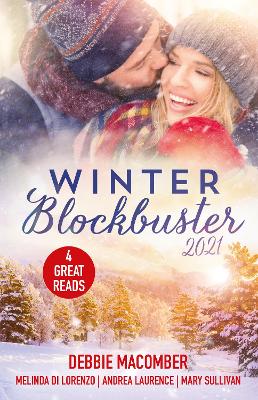 Yours And Mine - Debbie Macomber

Marriage is an experience that single mum Joanna Parsons doesn't plan to repeat, no matter what her eleven-year-old daughter, Kristen, thinks. Tanner Lund feels the same way. Like Joanna, he got divorced after a short, disastrous marriage. And like her, he's raising his eleven-year-old daughter, Nicole, alone. But Kristen and Nicole have other plans in mind - and it involves the best friends becoming sisters. Both Tanner and Joanna are determined to avoid marriage, yet there's no resisting their growing attraction...

Wanted for murder, Graham Calloway has hidden for years in a remote mountain cabin, desperate to find the killer who framed him. Keira Niles, too, is running from her shattered life when, during a blizzard, a mysterious, silent stranger pulls her from her wrecked car. Their sizzling attraction is instant; mutual trust is not. While Keira doubts Graham's innocence, Graham fears she'll expose him.

Instead it's an unforeseen betrayal that threatens Keira, causing Graham to risk exposure - and his life - to rescue her and redeem himself. For the first time he wants a future...but will the killer let him have one?

Snowed In With Her Ex - Andrea Laurence

Wedding photographer Briana Harper never expected to run into her ex at an engagement shoot! And when a blizzard strands them...alone...in a remote mountain cabin, she knows she's in trouble. She's never forgotten Ian Lawson, but none of the reasons they broke up have changed. He's still a workaholic. And now he's an engaged workaholic!

But Ian is also still a man who knows what he wants. And what he wants is Briana. Untangling the lies of his current engagement leaves him free to...indulge. Yet proving he's changed may be this music mogul's toughest negotiation yet...

Visitors are rare at widower Michael Moreno's Rodeo, Montana, ranch. When Samantha Read and her two sons turn up, seeking shelter in a snowstorm, his kids are ecstatic. Michael is less enthusiastic. Sammy's sophisticated city vibe seems out of place in his country home. But even he can't deny that the bubbly beauty lights up the whole house.

Though Sammy doesn't know much about ranching, she recognises an aching heart when she sees one. Michael and his kids could use some cheer and she's determined to make the most of their time together. But as the heat between Sammy and Michael threatens to melt the snow, Sammy wonders if Michael's heart could be thawing as well...

Buy Winter Blockbuster 2021/Yours and Mine/Trusting a Stranger/Snowed In with Her Ex/Rodeo Rancher by Melinda Di Lorenzo from Australia's Online Independent Bookstore, Boomerang Books.

» Have you read this book? We'd like to know what you think about it - write a review about Winter Blockbuster 2021/Yours and Mine/Trusting a Stranger/Snowed In with Her Ex/Rodeo Rancher book by Melinda Di Lorenzo and you'll earn 50c in Boomerang Bucks loyalty dollars (you must be a Boomerang Books Account Holder - it's free to sign up and there are great benefits!)


A Preview for this title is currently not available.
More Books By Melinda Di Lorenzo
View All