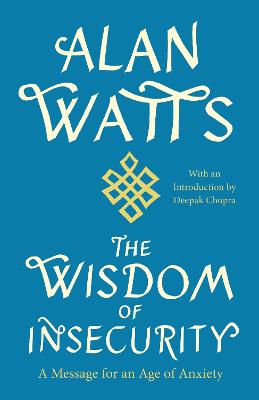 The Wisdom of Insecurity

A Message for an Age of Anxiety

Description - The Wisdom of Insecurity by Alan Watts

"The perfect guide for a course correction in life, away from materialism and its empty promise" (Deepak Chopra), The Wisdom of Insecurity shows us how-in an age of unprecedented anxiety-we must embrace the present and live fully in the now in order to live a fulfilling life.

Spending all our time trying to anticipate and plan for the future and to lamenting the past, we forget to embrace the here and now. We are so concerned with tomorrow that we forget to enjoy today. Drawing from Eastern philosophy and religion, Alan Watts shows that it is only by acknowledging what we do not-and cannot-know that we can learn anything truly worth knowing.

"Perhaps the foremost interpreter of Eastern disciplines for the contemporary West, Watts had the rare gift of 'writing beautifully the unwritable.'"
-Los Angeles Times

Book Reviews - The Wisdom of Insecurity by Alan Watts

» Have you read this book? We'd like to know what you think about it - write a review about Wisdom of Insecurity book by Alan Watts and you'll earn 50c in Boomerang Bucks loyalty dollars (you must be a Boomerang Books Account Holder - it's free to sign up and there are great benefits!)

Alan W. Watts, who held both a master's degree in theology and a doctorate of divinity, is best remembered as an interpreter of Zen Buddhism in particular, and of Indian and Chinese philosophy in general. Standing apart, however, from sectarian membership, he has earned the reputation of being one of the most original and "unrutted" philosophers of the twentieth century. Watts was the author of some twenty books on the philosophy and psychology of religion that have been published in many languages throughout the world, including the bestselling The Way of Zen. An avid lecturer, Watts appeared regularly on the radio and hosted the popular television series, Eastern Wisdom and Modern Life, in the 1960s. He died in 1973.

A Preview for this title is currently not available.
More Books By Alan Watts
View All

The Weather Handbook: The Essential Guide to How Weather is Formed and Develops
$29.39 $34.99