The Wise Master Builder: Platonic Geometry in Plans of Medieval Abbeys and Cathederals

Platonic Geometry in Plans of Medieval Abbeys and Cathederals

This title was first published in 2000: Did the plan of medieval churches have any underlying symbolic meaning? This work re-opens the debate about the importance of geometry and symbolism in medieval architectural design and argues the case for attributing an intellectual meaning to the planning of abbeys and cathedrals. In challenging prevailing claims for the use of arithmetical rations in architectural design, notably those based on the square root of two, Dr Hiscock advances a perspective consisting of proportions derived from the figures of Platonic geometry - the square, the equilateral triangle and the pentagon - and provides evidence for the symbolic interpretation of these figures. The investigation further reveals whole series of geometric relationships between some of England's most celebrated Norman cathedrals, such as Norwich or Durham, together with a wide sample from the Continent, from Old St Peter's in Rome to Chartres Cathedral, and sets out a comprehensive design method in each case. Hiscock first demonstrates the proposition that the ideas of Christian Platonism, including number and geometry, remained current and were employed in the thought of the early Middle Ages. In particular, he argues that they can be associated with the leading persons in the 10th-century revival of monasticism and that they found expression in the "white mantle of churches" that spread across Western Europe at the end of the first millennium AD. The book then provides a detailed analysis of the geometric proportions of church plans between the 9th and 12th centuries in Germany, France and in England. This research seeks to demonstrate that a coherent sequence of geometric forms can be seen in thse plans, forms which correspond to the key figures of Platonic geometry as understood in the context of Christian Platonist thought. In conclusion, the author shows how the system of design proposed could be set out on site using the known working methods of medieval masons.

Other Editions - The Wise Master Builder: Platonic Geometry in Plans of Medieval Abbeys and Cathederals by Nigel Hiscock 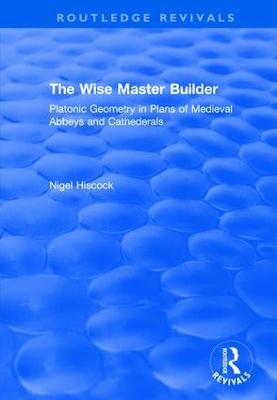 » Have you read this book? We'd like to know what you think about it - write a review about Wise Master Builder: Platonic Geometry in Plans of Medieval Abbeys and Cathederals book by Nigel Hiscock and you'll earn 50c in Boomerang Bucks loyalty dollars (you must be a Boomerang Books Account Holder - it's free to sign up and there are great benefits!)


A Preview for this title is currently not available.
More Books By Nigel Hiscock
View All

The Wise Master Builder: Platonic Geometry in Plans of Medieval Abbeys and Cathederals
$73.25 $73.99