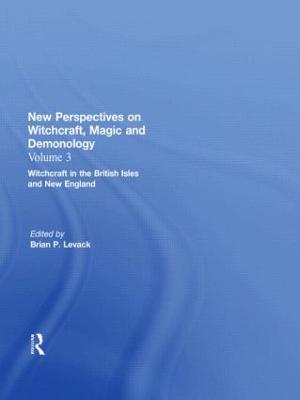 Witchcraft in the British Isles and New England

Description - Witchcraft in the British Isles and New England by Brian P. Levack

Gathering together the vast literature on witchcraft related issues published in the last decade, this six-volume set focuses on issues such as gender, government and law, the culture of religion and the occult. Using approaches from several disciplines, including anthropology and sociology, this source provides a sweeping overview of the occult.

» Have you read this book? We'd like to know what you think about it - write a review about Witchcraft in the British Isles and New England book by Brian P. Levack and you'll earn 50c in Boomerang Bucks loyalty dollars (you must be a Boomerang Books Account Holder - it's free to sign up and there are great benefits!)

Brian P. Levack is John Green Regents Professor of History at the University of Texas at Austin. A former Guggenheim Fellow, his other writings on witchcraft include Articles on Witchcraft, Magic, and Demonology (1992), The Witch-Hunt in Early Modern Europe (1995), and Witchcraft and Magic in Europe: The Eighteenth and Nineteenth Centuries (1999). Dr. Levack is also a specialist in the history of early modern England and Scotland, and has written several books on the subject.

A Preview for this title is currently not available.
More Books By Brian P. Levack
View All