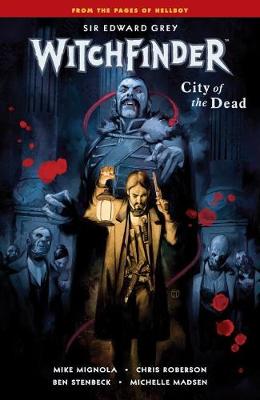 Witchfinder Volume 4: City Of The Dead

Description - Witchfinder Volume 4: City Of The Dead by Ben Stenbeck

Flesheating corpses and an ancient temple discovered beneath London lead authorities to call upon Edward Grey, Queen Victoria's official occult investigator. But the sinister Heliopic Brotherhood of Ra also has interests in the underground ruins. When they ask for Grey's help, he has to wonder if the threat is great enough to team up with a secret society he's sworn to destroy.

» Have you read this book? We'd like to know what you think about it - write a review about Witchfinder Volume 4: City Of The Dead book by Ben Stenbeck and you'll earn 50c in Boomerang Bucks loyalty dollars (you must be a Boomerang Books Account Holder - it's free to sign up and there are great benefits!)

Mike Mignola's fascination with ghosts and monsters began at an early age; reading Dracula at age twelve introduced him to Victorian literature and folklore, from which he has never recovered. Starting in 1982 as a bad inker for Marvel Comics, he swiftly evolved into a not-so-bad artist. By the late 1980s, he had begun to develop his own unique graphic style, with mainstream projects like Cosmic Odyssey and Batman- Gotham by Gaslight. In 1994, he published the first Hellboy series through Dark Horse. There are thirteen Hellboy graphic novels (with more on the way), several spinoff titles (B.P.R.D., Lobster Johnson, Abe Sapien, and Sir Edward Grey- Witchfinder), prose books, animated films, and two live-action films starring Ron Perlman. Along the way he worked on Francis Ford Coppola's film Bram Stoker's Dracula (1992), was a production designer for Disney's Atlantis- The Lost Empire (2001), and was the visual consultant to director Guillermo del Toro on Blade II (2002), Hellboy (2004), and Hellboy II- The Golden Army (2008). Mike lives in Southern California with his wife, daughter, and cat. The author lives in Los Angeles, CA.

A Preview for this title is currently not available.
More Books By Ben Stenbeck
View All