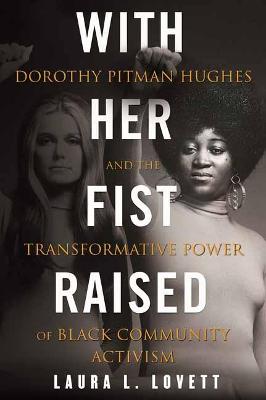 With Her Fist Raised: Dorothy Pitman Hughes and the Transformative Power of Black Community Activism

Description - With Her Fist Raised: Dorothy Pitman Hughes and the Transformative Power of Black Community Activism by Laura Lovett

The first biography of Dorothy Pitman Hughes, co-founder of Ms. Magazine and trailblazing Black feminist activist whose work made children, race, and welfare rights central to the women's movement.

Historian Laura Lovett weaves together a biography of an activist who was intersectional to the core revealing a remarkable legacy that few have known until now and will appeal to readers interested in urban studies, activism, and Black women's history.

Dorothy Pitman Hughes was a transformative community organizer in New York City in the 1970s, who shared the stage with Gloria Steinem for five years, captivating audiences around the country. After leaving rural Georgia in the 1950s, she moved to New York, determined to fight for civil rights and equality. Lovett traces Pitman Hughes' transformation into a powerhouse activist determined to take on the needs of her community and build a platform for empowerment. She created lasting change by revitalizing her West Side neighborhood, a community subjected to racial discrimination, with nonexistent childcare and sub-standard housing, in which poverty, drug use, lack of job training, and the effects of the Vietnam War were evident She imagined and then created a high quality child care center which also offered job training, adult education classes, a Youth Action corps, housing assistance and food resources. Pitman Hughes' realization that the area could be revitalized by actively engaging and including the community was prescient and is startlingly relevant. As her stature and influence grew to a national level, Pitman Hughes went from the West Side to spending several years traversing the country with Steinem and educating people about feminism, childcare, and race. Pitman Hughes's community activism was transformed when she moved to Harlem in the 1970s to counter gentrification. She bought the franchise to the Miss Greater New York City pageant in order to demonstrate that black was beautiful. She also opened an office supply store and became a powerful voice for Black women entrepreneurs and Black-owned business only to be thwarted by plans for economic development that favored national chains over local businesses. Throughout every phase of her life, Pitman Hughes' understood the transformative power of activism with the Black community.

Book Reviews - With Her Fist Raised: Dorothy Pitman Hughes and the Transformative Power of Black Community Activism by Laura Lovett

» Have you read this book? We'd like to know what you think about it - write a review about With Her Fist Raised: Dorothy Pitman Hughes and the Transformative Power of Black Community Activism book by Laura Lovett and you'll earn 50c in Boomerang Bucks loyalty dollars (you must be a Boomerang Books Account Holder - it's free to sign up and there are great benefits!)


A Preview for this title is currently not available.
More Books By Laura Lovett
View All