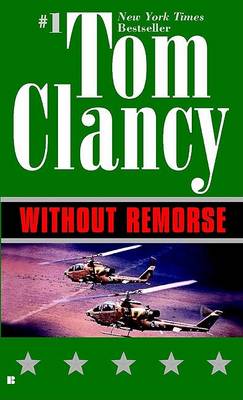 Description - Without Remorse by CLANCY TOM

Over the course of seven novels, Tom Clancy's "genius for big, compelling plots" and his "natural narrative gift" (The New York Times Magazine) have mesmerized tens of millions of readers and established him as one of the preeminent storytellers of our time. Without Remorse, however, goes beyond anything he has ever done. Its hero is John Kelly, a man well familiar to Clancy's readers by his code name, Mr. Clark. In The Sum of All Fears, he hunted down nuclear terrorists. In Clear and Present Danger, he led aerial raids against drug lords. In The Cardinal of the Kremlin, he spirited away a KGB chief's family by submarine. But nothing will ever be as deadly - or as personal - as the danger he must face in Without Remorse. John Kelly, former Navy SEAL and Vietnam veteran, is still getting over the accidental death of his wife six months before, when he befriends a young woman with a decidedly checkered past. When that past reaches out for her in a particularly horrifying fashion, he vows revenge and, assembling all of his old skills, sets out to track down the men responsible, before it can happen again. At the same time, the Pentagon is readying an operation to rescue a key group of prisoners in a North Vietnamese prisoner-of-war camp. One man, they find, knows the terrain around the camp better than anyone else they have: a certain former Navy SEAL named John Kelly. Kelly has his own mission. The Pentagon wants him for theirs. Attempting to juggle the two, Kelly (now code-named Mr. Clark) finds himself confronted by a vast array of enemies, both at home and abroad - men so skillful that the slightest misstep means death. And the fate of dozens of people, including Kelly himself, restson his making sure that misstep never happens. Men aren't born dangerous. They grow dangerous. And the most dangerous of all, Kelly learns, are the ones you least expect... As Clancy takes us through the twists and turns of Without Remorse, he blends the exceptional realism and au

» Have you read this book? We'd like to know what you think about it - write a review about Without Remorse book by CLANCY TOM and you'll earn 50c in Boomerang Bucks loyalty dollars (you must be a Boomerang Books Account Holder - it's free to sign up and there are great benefits!)

A little more than thirty years ago Tom Clancy was a Maryland insurance broker with a passion for naval history. Years before, he had been an English major at Baltimore's Loyola College and had always dreamed of writing a novel. His first effort, The Hunt for Red October, sold briskly as a result of rave reviews, then catapulted onto the New York Times bestseller list after President Reagan pronounced it "the perfect yarn." From that day forward, Clancy established himself as an undisputed master at blending exceptional realism and authenticity, intricate plotting, and razor-sharp suspense. He passed away in October 2013.

A Preview for this title is currently not available.
More Books By CLANCY TOM
View All