A Wizard of Earthsea

Description - A Wizard of Earthsea by Ursula Le Guin

The first in one of the greatest fantasy sequences of our time.

The first book of Earthsea is a tale of wizards, dragons and terrifying shadows.

The island of Gont is a land famous for wizards. Of these, some say the greatest - and surely the greatest voyager - is the man called Sparrowhawk. As a reckless, awkward boy, he discovered the great power that was in him - with terrifying consequences. Tempted by pride to try spells beyond his means, Sparrowhawk lets loose an evil shadow-beast in his land. Only he can destroy it, and the quest leads him to the farthest corner of Earthsea.

'One of the literary greats of the 20th century' Margaret Atwood

Other Editions - A Wizard of Earthsea by Ursula Le Guin 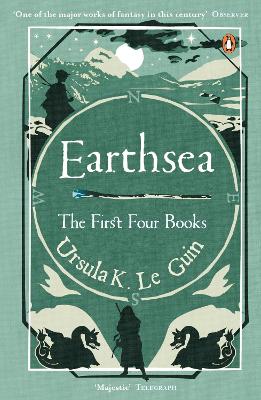 Book Reviews - A Wizard of Earthsea by Ursula Le Guin

» Have you read this book? We'd like to know what you think about it - write a review about Wizard of Earthsea book by Ursula Le Guin and you'll earn 50c in Boomerang Bucks loyalty dollars (you must be a Boomerang Books Account Holder - it's free to sign up and there are great benefits!)

Ursula K. Le Guin was born in Berkley, California, in 1929, daughter of the writer Theodora Kroeber and the anthropologist Alfred Kroeber. Her published work includes twenty-one novels, eleven volumes of short stories, four collections of essays, twelve books for children, seven volumes of poetry and four of translation. Among her best-known novels are The Left Hand of Darkness, The Dispossessed, Always Coming Home and Lavinia. She holds five Hugo and six Nebula Awards, the last for Powers in 2009, and the National Book Foundation Medal for Distinguished Contribution to American Letters. Ursula K. Le Guin's most famous work of fantasy is the Earthsea series. The books have been translated into many languages around the world.

La Belle Sauvage: The Book of Dust Volume One: From the world of Philip Pullman's His Dark Materials - now a major BBC series
Philip Pullman
$13.59 $16.99