The Wolf, the Duck and the Mouse

Description - The Wolf, the Duck and the Mouse by Mac Barnett

Early one morning a mouse met a wolf and was quickly gobbled up...When a woeful mouse is swallowed up by a wolf, he quickly learns he is not alone: a duck has already set up digs and, boy, has that duck got it figured out! Turns out it's pretty nice inside the belly of the beast - there's delicious food, elegant table settings and, best of all, dancing. And there's something more: no more fear of being eaten by a wolf! Life's not so bad, considering the alternatives. That is, until a hunter shows up... With a nod to traditional fables and a wink to the reader, the award-winning Mac Barnett and Jon Klassen of Sam and Dave Dig a Hole, Extra Yarn and Triangle offer a tale of cooperation and creative cuisine that is sure to go down easy.

Buy The Wolf, the Duck and the Mouse by Mac Barnett from Australia's Online Independent Bookstore, Boomerang Books.

Other Editions - The Wolf, the Duck and the Mouse by Mac Barnett 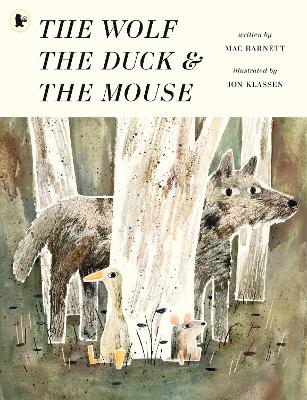 Book Reviews - The Wolf, the Duck and the Mouse by Mac Barnett

» Have you read this book? We'd like to know what you think about it - write a review about Wolf, the Duck and the Mouse book by Mac Barnett and you'll earn 50c in Boomerang Bucks loyalty dollars (you must be a Boomerang Books Account Holder - it's free to sign up and there are great benefits!)

Mac Barnett is the author of several picture books, including Chloe and the Lion and Guess Again!, which TIME Magazine named the no. 2 Picture Book of 2010. He also writes the Brixton Brothers series of mysteries. Mac is the founder of the Echo Park Time Travel Mart, a convenience store for time travellers, and serves on the board of 826LA, a not-for-profit writing and tutoring centre in LA. His collaborations with Jon Klassen, Extra Yarn and Sam & Dave Dig a Hole, have both won the Caldecott Honor. He lives in California, USA. Jon Klassen has created illustrations for popular series The Incorrigible Children of Ashton Place and served as an illustrator on the animated feature film Coraline. His illustrations for Caroline Stutson's Cats Night Out won the Governor General Award in 2010. I Want My Hat Back is the first book he has both written and illustrated. Originally from Niagara Falls, Canada, he lives in Los Angeles, USA.