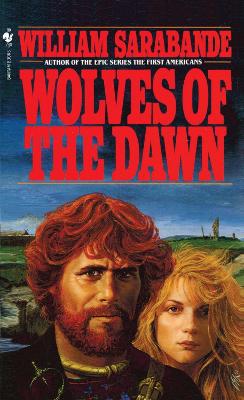 Wolves Of The Dawn

Description - Wolves Of The Dawn by William Sarabande

As the Stone Age slowly gives way to the age of Bronze, a proud warrior clan faces the challenge of a new life in an alien land. Led by the great chieftain Fomor, once called the Wolf of the Western Tribes, the clan MacLir knows the limits of stone against the strange new weapons of their sworn enemy, Nemed MacAgnomian. And so the people of the Ax have settles in the fens of Albion, exchanging flint weapons for farm implements, trading the ways of the warrior for the path of peace. But prosperity has not followed on the heels of their decision, and many in the clan urge their lord to become the Wolf once more . . . or threaten to rise up against him. It is Fomor's firstborn son, Balor, headstrong, and defiant, who receives the sign of the gods that the time of the Wolf is at hand--as the cruel Nemed and his raiders sail toward Albion's shores to wipe the clan MacLir from the face of the earth. And it is Balor who will take up the forbidden sword Retaliator to avenge the past . . . .

Book Reviews - Wolves Of The Dawn by William Sarabande

» Have you read this book? We'd like to know what you think about it - write a review about Wolves Of The Dawn book by William Sarabande and you'll earn 50c in Boomerang Bucks loyalty dollars (you must be a Boomerang Books Account Holder - it's free to sign up and there are great benefits!)

Joan Hamilton Cline is the real name of William Sarabande, author of the internationally bestselling First Americans series. She was born in Hollywood, California, and started writing when she was seventeen. First published in 1979, Joan has been writing as William Sarabande ever since. She lives with her husband in Fawnskin, California.