A Woman In Charge

The Life of Hillary Rodham Clinton

Description - A Woman In Charge by Carl Bernstein

A Woman in Charge reveals the true trajectory of Hillary's astonishing life and career. From a staunchly Republican household and apparently idyllic Midwestern girlhood - her disciplinarian father here revealed as harsher than she has acknowledged - we see the shaping of a brilliant girl whose curiosity was fuelled by the ferment of the 1960s and a desire to change the world. During her student years, she was already perceived as a spokeswoman for her generation. Then, at Yale Law School, she met and fell in love with Bill Clinton, cancelling her own dreams to tie her fortunes to his.Bernstein clarifies the often amazing dynamic of their marriage, charting both her political acumen and her blind spots, and untangling her relationship to the great controversies of Whitewater, Troopergate and Travelgate. And then, in the emotional and political chaos of the Lewinsky affair we see Hillary standing by her husband - evoking a rising wave of sympathy from a public previously cool to her and in effect, Bernstein argues, saving his presidency. It helps carry her into the Senate- her time has come. As she decides to run for President, this self-described 'mind-conservative and heart liberal' has one more chance to fulfill her long-deferred ambitions.Bernstein has interviewed some 200 of her colleagues, friends and enemies and was given unique access to the candid record of the 1992 presidential campaign kept by Hillary's best friend, Diane Blair. Marshalling all the skills and energy that propelled his history-making Pulitzer prize-winning coverage of Watergate, he gives us a detailed, sophisticated, comprehensive and revealing account of the complex human being and political meteor who has already helped define one presidency and may well become the woman in charge of another.

Other Editions - A Woman In Charge by Carl Bernstein 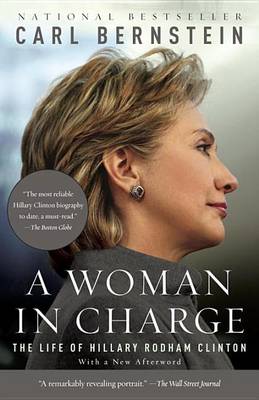 Book Reviews - A Woman In Charge by Carl Bernstein

» Have you read this book? We'd like to know what you think about it - write a review about Woman In Charge book by Carl Bernstein and you'll earn 50c in Boomerang Bucks loyalty dollars (you must be a Boomerang Books Account Holder - it's free to sign up and there are great benefits!)

Carl Bernstein, with Bob Woodward, shared a Pulitzer Prize for their coverage of Watergate for the Washington Post. He is the author, with Woodward, of All the President's Men and The Final Days, and, with Marco Politi, of His Holiness- John Paul II and the History of Time. He is also the author of Loyalties, a memoir about his parents during McCarthy-era Washington. He was a Washington bureau chief and correspondent for ABC News. He lives with his wife, Christine, in New York.

A Preview for this title is currently not available.
More Books By Carl Bernstein
View All