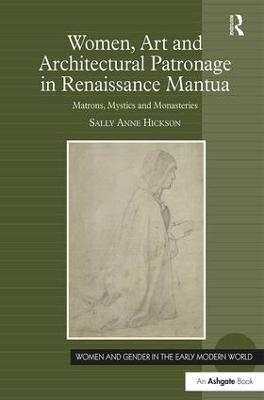 Analyzing the artistic patronage of famous and lesser known women of Renaissance Mantua, and introducing new patronage paradigms that existed among those women, this study sheds new light the social, cultural and religious impact of the cult of female mystics of that city in the late fifteenth and early sixteenth century. Author Sally Hickson combines primary archival research, contextual analysis of the climate of female mysticism, and a re-examination of a number of visual objects (particularly altarpieces devoted to local beatae, saints and female founders of religious orders) to delineate ties between women both outside and inside the convent walls. The study contests the accepted perception of Isabella d'Este as a purely secular patron, exposing her role as a religious patron as well. Hickson introduces the figure of Margherita Cantelma and documents concerning the building and decoration of her monastery on the part of Isabella d'Este; and draws attention to the cultural and political activities of nuns of the Gonzaga family, particularly Isabella's daughter Livia Gonzaga who became a powerful agent in Mantuan civic life. Women, Art and Architectural Patronage in Renaissance Mantua provides insight into a complex and fluid world of sacred patronage, devotional practices and religious roles of secular women as well as nuns in Renaissance Mantua. » Have you read this book? We'd like to know what you think about it - write a review about Women, Art and Architectural Patronage in Renaissance Mantua book by Sally Anne Hickson and you'll earn 50c in Boomerang Bucks loyalty dollars (you must be a Boomerang Books Account Holder - it's free to sign up and there are great benefits!)

Sally Hickson is Associate Professor of Art History at the University of Guelph (Canada), where she teaches Italian Renaissance and Baroque art and architecture.

A Preview for this title is currently not available.
More Books By Sally Anne Hickson
View All