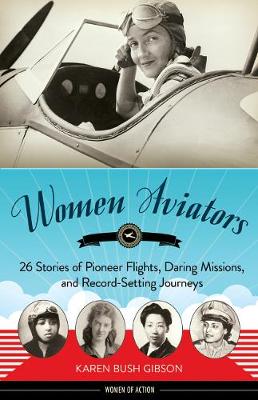 A Notable Social Studies Trade Books for Young People From the very first days of aviation, women were there. Katherine Wright, though not a pilot, helped her brothers Orville and Wilbur so much that some called her the "Third Wright Brother." Pioneers such as Baroness Raymonde de Laroche of France ignored those who ignorantly claimed that only men possessed the physical strength or the mental capacity to pilot an airplane, and in 1910 became the first woman awarded a license to fly. A year later, Harriet Quimby was the first woman to earn a pilot's license in the United States and in 1912 flew across the English Channel-another first. Author Karen Bush Gibson profiles 26 women aviators who sought out and met challenges both in the sky and on the ground, where some still questioned their abilities. Read about barnstormers like Bessie Coleman and racers like Louise Thaden, who bested Amelia Earhart and Pancho Barnes to win the 1929 Women's Air Derby, sometimes called the Powder Puff Derby.
Learn about Jacqueline Cochran who, during World War II, organized and trained the Women Airforce Service Pilots-the WASPs-to serve their country by ferrying airplanes from factories to the front lines and pulling target planes during anti-aircraft artillery training. And see how female pilots today continue to achieve and serve while celebrating their love of flight. » Have you read this book? We'd like to know what you think about it - write a review about Women Aviators book by Karen Bush Gibson and you'll earn 50c in Boomerang Bucks loyalty dollars (you must be a Boomerang Books Account Holder - it's free to sign up and there are great benefits!)

Karen Bush Gibson is the author of eight books on Native American culture. She lives in Norman, Oklahoma.

A Preview for this title is currently not available.
More Books By Karen Bush Gibson
View All