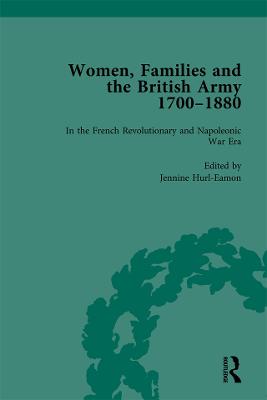 This series concentrates on women and the soldiers in the ranks whose lives they shared, assembling a wide body of evidence of their romantic entanglements and domestic concerns. The new military history of recent decades has demanded a broadening of the source base beyond elite accounts or those that concentrate solely on battlefield experiences. Armies did not operate in isolation, and men's family ties influenced the course of events in a variety of ways. Campfollowing women and children occupied a liminal space in campaign life. Those who travelled "on the strength" of the army received rations in return for providing services such as laundry and nursing, but they could also be grouped with prostitutes and condemned as a 'burden' by officers. Parents, wives, and offspring left behind at home remained in soldiers' thoughts, despite an army culture aimed at replacing kin with regimental ties. Soldiers' families' suffering, both on the march and back in Britain, attracted public attention at key points in this period as well.

This series provides, for the first time in one place, a wide body of texts relating to common soldiers' personal lives: the women with whom they became involved, their children, and the families who cared for them. It brings hitherto unpublished material into print for the first time, and resurrects accounts that have not been in wide circulation since the nineteenth century. The collection combines the observations of officers, government officials and others with memoirs and letters from men in the ranks, and from the women themselves. It draws extensively on press accounts, especially in the nineteenth century. It also demonstrates the value of using literary depictions alongside the letters, diaries, memoirs and war office papers that form the traditional source base of military historians.

» Have you read this book? We'd like to know what you think about it - write a review about Women, Families and the British Army, 1700-1880 Vol 2 book by Jennine Hurl-Eamon and you'll earn 50c in Boomerang Bucks loyalty dollars (you must be a Boomerang Books Account Holder - it's free to sign up and there are great benefits!)