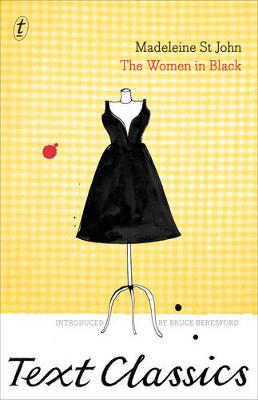 Introduced by Bruce Beresford At the very end of the Ladies' Frocks Departments, past Cocktail Frocks, there was something very special, something quite, quite wonderful; but it wasn't for everybody- that was the point. Because there, at the very end, there was a lovely arch, on which was written in curly letters Model Gowns. In the famous F.G. Goode department store, Lisa is the new Sales Assistant (Temporary) in Ladies' Cocktail Frocks. She is about to meet Magda, the glamorous Continental refugee and guardian of the rose-pink cave of Model Gowns. www.textclassics.com.au

» Have you read this book? We'd like to know what you think about it - write a review about Women In Black: Text Classics book by Madeleine St John and you'll earn 50c in Boomerang Bucks loyalty dollars (you must be a Boomerang Books Account Holder - it's free to sign up and there are great benefits!)

Madeleine St John was born in Sydney in 1941. Her father, Edward, was a barrister and Liberal politician. Her mother, Sylvette, committed suicide in 1954, when Madeleine was twelve. Sylvette's death, Madeleine later said, `obviously changed everything'. St John studied Arts at Sydney University, where her contemporaries included Bruce Beresford, Germaine Greer, Clive James and Robert Hughes. In 1965 she married Chris Tillam, a fellow student, and they moved to the United States where they first attended Stanford and later Cambridge. From Cambridge, St John relocated to London in 1968. The couple did not reunite and the marriage ended. St John settled in Notting Hill. She worked at a series of odd jobs, and then, in 1993, published her first novel, The Women in Black, the only book she set in Australia. When her third novel, The Essence of the Thing (1997), was shortlisted for the Man Booker Prize, she became the first Australian woman to receive this honour. St John died in 2006.