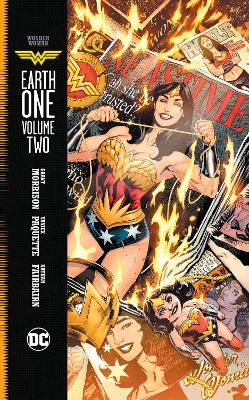 The highly anticipated sequel to the #1 New York Times bestselling original graphic novel is here in WONDER WOMAN- EARTH ONE VOL. 2, from the acclaimed creative team of Grant Morrison and Yanick Paquette!

For years, Diana of Paradise Island yearned to leave the only home she knew behind for adventures that laid beyond its shores. Now, after a fateful meeting with Air Force pilot Steve Trevor, the Amazon Warrior finds herself in Man's World. And she is ready for anything that it may throw at her.

But is the world ready for Wonder Woman? An American Government, fraught with dissession and conflicts foreign to Diana, have deemed her a danger to society. How will Wonder Woman carry out her mission of peace and love in a world that can't get out of its own way? That is, unless there are more insidious forces at play...

Continuing the tradition of critically acclaimed EARTH ONE tales that challenge the status quo of the comics industry, WONDER WOMAN- EARTH ONE VOL. 2 is Grant Morrison's latest genre-rocking salvo. With dynamic illustrations from the divine Yanick Paquette, this original graphic novel is a classic in the making.

» Have you read this book? We'd like to know what you think about it - write a review about Wonder Woman Earth One Vol. 2 book by Grant Morrison and you'll earn 50c in Boomerang Bucks loyalty dollars (you must be a Boomerang Books Account Holder - it's free to sign up and there are great benefits!)

Writer Grant Morrison is known for his innovative work on comics from the graphic novel BATMAN- ARKHAM ASYLUM to acclaimed runs on ANIMAL MAN and DOOM PATROL, as well as his subversive creator-owned titles such as THE INVISIBLES, SEAGUY and WE3. Grant has also written best-selling runs on JLA, SEVEN SOLDIERS OF VICTORY and NEW X-MEN and helped to reinvent the DC Universe in THE MULTIVERSITY, ALL-STAR SUPERMAN, 52, BATMAN, BATMAN & ROBIN and BATMAN, INCORPORATED.