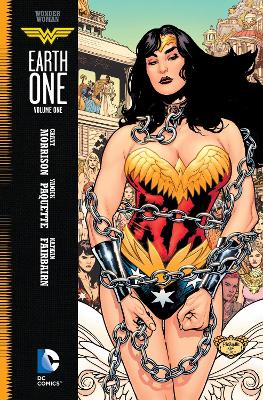 For millennia, the Amazons of Paradise Island have created a thriving society away from the blight of man. One resident, however, is not satisfied with this secluded life--Diana, Princess of the Amazons, knows there is more in this world and wants to explore, only to be frustrated by her protective mother, Hippolyta. Diana finds her escape when Air Force pilot Steve Trevor, the first man she has ever seen, crashes onto their shores. With his life hanging in the balance, Diana ventures into the long forbidden world of men. The Amazons chase after her and bring her back to Paradise Island in chains to face trial for breaking their oldest law--staying separated from the world that wronged them.

» Have you read this book? We'd like to know what you think about it - write a review about Wonder Woman Earth OneTP Vol 1 book by Grant Morrison and you'll earn 50c in Boomerang Bucks loyalty dollars (you must be a Boomerang Books Account Holder - it's free to sign up and there are great benefits!)

Grant Morrison is known for his innovative work on comics from the graphic novel ARKHAM ASYLUM to acclaimed runs on ANIMAL MAN and DOOM PATROL, as well as his subversive creator owned titles such as THE INVISIBLES, SEAGUY, JOE THE BARBARIAN and WE3. He has also written best-selling runs on SUPERMAN- ACTION COMICS, BATMAN, INCORPORATED, JLA, SEVEN SOLDIERS OF VICTORY and NEW X-MENand recently helped to reinvent the DC Universe in ALL-STAR SUPERMAN, 52, BATMAN and JOE THE BARBARIAN.