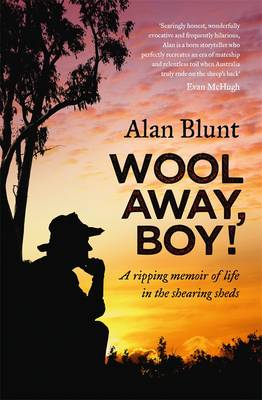 A Ripping Memoir of Life in the Shearing Sheds

A firsthand account of the shearing sheds of the 1950s and 60s.

A firsthand account of the shearing sheds of the 1950s and 60s.

The son of a shearer, Alan Blunt spent his teenage years in the woolsheds of the 1950s and 60s. As his father laboured, Alan would imagine himself opening the batting for Australia or boxing for the world middleweight championship, only to be startled out of his daydream with a cry of- 'Wool away, boy. Wake up!'

In this colourful memoir Alan chronicles all the larger-than-life personalities he met- the misfits, romantics, larrikins and psychopaths. From the cooks who ruled the sheds - those solitary, often crazy men who could make or break a team's stay - to the gun shearers and maverick managers. With an irrepressible wit, he captures the voices of the men he worked with and brings to life a golden era of shearing.

» Have you read this book? We'd like to know what you think about it - write a review about Wool Away, Boy! book by Alan Blunt and you'll earn 50c in Boomerang Bucks loyalty dollars (you must be a Boomerang Books Account Holder - it's free to sign up and there are great benefits!)

For thirty years Alan Blunt worked the woolsheds in outback Queensland. He was a keen observer of character, and in the evenings recorded the portraits of fellow workers by the light of a pressure lamp, filling one foolscap pad after another. Later he had stories published in the outback and metropolitan press. In 1993 he formed a touring theatre troupe based at Longreach, which he ran successfully for twenty years. A small legend in his own right, Alan still performs two one-man shows a week, is writing a novel and makes frequent guest appearances on local ABC Radio.