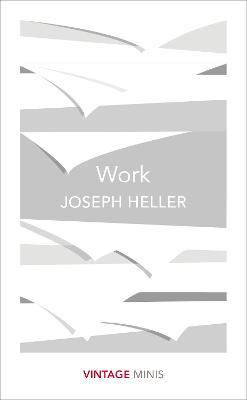 Bob Slocum is anxious, bored and fearful of his job. So why is it he wants nothing more than the chance to speak at the next company convention? In this darkly satirical book, Joseph Heller takes us for a turn on the maddening hamster wheel of work. Heller's workplace is a cradle of paranoia, bravado and nauseating banter, forever shadowed by that perennial question, who's really running the show here? In Heller's hands, our daily grind has never seemed so absurd.

Selected from the book Something Happened by Joseph Heller

» Have you read this book? We'd like to know what you think about it - write a review about Work book by Joseph Heller and you'll earn 50c in Boomerang Bucks loyalty dollars (you must be a Boomerang Books Account Holder - it's free to sign up and there are great benefits!)

Joseph Heller was born in 1923 in Brooklyn, New York. He served as a bombardier in the Second World War and then attended New York University and Columbia University and then Oxford, the last on a Fullbright scholarship. He then taught for two years at Pennsylvania State University, before returning to New York, where he began a successful career in the advertising departments of Time, Look and McCall's magazines. It was during this time that he had the idea for Catch-22. Working on the novel in spare moments and evenings at home, it took him eight years to complete and was first published in 1961. His second novel, Something Happened was published in 1974, Good As Gold in 1979 and Closing Time in 1994. He is also the author of the play We Bombed in New Haven.

A Preview for this title is currently not available.
More Books By Joseph Heller
View All