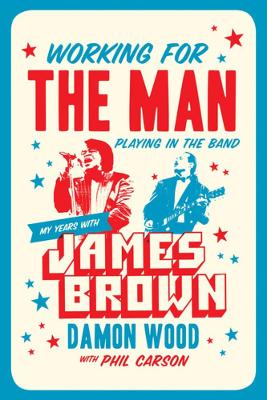 Working For The Man, Playing In The Band

My Years with James Brown

Description - Working For The Man, Playing In The Band by Damon Wood

A white rock 'n' roll guitarist on stage with the Godfather of Soul.

In this unvarnished account of toiling under one of popular music's most notorious bosses, Damon Wood details his six years spent playing guitar for James Brown's Soul Generals.

In a memoir certain to fascinate Mr Dynamite's millions of fans, as well as musicians and industry insiders, Wood recalls how a chance encounter with James Brown led him to embrace soul and funk music under the tutelage of its greatest progenitor. Numerous interviews with bandmates provide multiple perspectives on James Brown's complex character, his leadership of his band, the nature of soul and funk and insights and sometimes harsh lessons learned along the way.

This is a sideman's story of the gritty reality of working close to the spotlight but rarely in it. Damon Wood describes life on the road - often on James Brown's infamous tour bus - with one guitar, a change of clothes and two dozen comrades-in-arms as they brought the funk to clubs, theaters and the biggest music festivals on earth. Working for James Brown could be fear-inducing, inspiring, exhilarating and exasperating - all in the space of a single performance.

'Wood and Carson smoothly explain the intricacies of being a guitarist, detailing but never dwelling on minutiae such as Brown's hand signals or tuning on the fly. Readers will come away with a deep respect for the skill and resilience needed to be a professional touring musician, especially one traveling and playing with a mercurial star.' - Publishers Weekly

'An insider's account that will delight both Brown fans and those interested in what it's like working fro such a dedicated showman. Kudos to Wood for delivering the inside scoop on a demanding performer with exacting standards who brought it, every night.' - Library Journal

'An absorbing inside look at the not always glamorous life of working for one of the most famous and unpredictable bosses in popular music.' - Booklist Online

'This is a musician's tale, albeit one working within what was essentially a corporation by the time he joined, and Damon has written an essential backstory to one of the greatest live shows on Earth. Warts and all.' - All Music Books

Buy Working For The Man, Playing In The Band by Damon Wood from Australia's Online Independent Bookstore, Boomerang Books.

Other Editions - Working For The Man, Playing In The Band by Damon Wood Book Reviews - Working For The Man, Playing In The Band by Damon Wood

» Have you read this book? We'd like to know what you think about it - write a review about Working For The Man, Playing In The Band book by Damon Wood and you'll earn 50c in Boomerang Bucks loyalty dollars (you must be a Boomerang Books Account Holder - it's free to sign up and there are great benefits!)

Damon Wood played guitar for the Soul Generals from 1998 to 2006, shortly before James Brown's passing. Wood has led his band, Harmonious Junk, since 2001, performing and recording original music to glowing reviews. He lives in Denver. Phil Carson is a Denver-based journalist. He is the author of Roy Buchanan: American Axe.

A Preview for this title is currently not available.
More Books By Damon Wood
View All