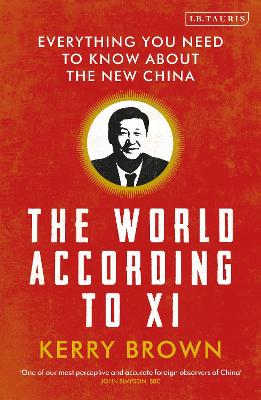 The World According to Xi

Everything You Need to Know About the New China

Description - The World According to Xi by Kerry Brown

China is now the most powerful country on earth. Its manufacturing underpins the world's economy; its military is growing at the fastest rate of any nation and its leader - Xi Jinping - is to set the pace and tone of world affairs for decades.
In 2017 Xi Jinping became part of the constitution - an honour not seen since Chairman Mao. Here, China expert Kerry Brown guides us through the world according to Xi: his plans to make China the most powerful country on earth and to eradicate poverty for its citizens. In this captivating book we discover Xi's beliefs, how he thinks about communism, and how far he is willing to go to defend it.

Buy The World According to Xi by Kerry Brown from Australia's Online Independent Bookstore, Boomerang Books.

Book Reviews - The World According to Xi by Kerry Brown

» Have you read this book? We'd like to know what you think about it - write a review about World According to Xi book by Kerry Brown and you'll earn 50c in Boomerang Bucks loyalty dollars (you must be a Boomerang Books Account Holder - it's free to sign up and there are great benefits!)

Kerry Brown is the Director of the Lau China Institute at King's College London and Associate for Chinese Affairs at Chatham House. With 30 years experience of life in China, he has worked in education, business and government, including a term as First Secretary at the British Embassy in Beijing. He writes regularly for the Times Literary Supplement, The Observer, The Diplomat and Foreign Affairs, as well as for many international and Chinese media outlets. He is the Amazon-bestselling author of China's World (I.B.Tauris, 2017), CEO China (I.B.Tauris, 2016) andThe New Emperors (I.B.Tauris, 2014). His other books include Contemporary China (2012), Friends and Enemies: The Past, Present and Future of the Communist Party of China (with Will Hutton, 2009) and Struggling Giant: China in the 21st Century (with Jonathan Fenby, 2007).

A Preview for this title is currently not available.
More Books By Kerry Brown
View All

What's Wrong With Diplomacy?: The Future Of Diplomacy And The Case Of China And The UK: Penguin Specials
$8.49 $9.99