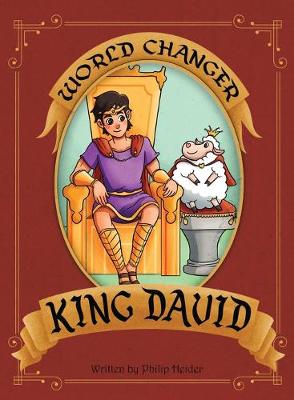 King David went down in history as one of the best kings of Israel ever. He truly was a WORLD CHANGER. What made him such an awesome king? Was it because he was strong and mighty, was it because he was smarter than anyone else, was he just plain old lucky, or maybe... it was because of his heart. Follow king David and his beloved sheep on this epic adventure as we look into David's life and what made him a WORLD CHANGER.

World Changer King David looks at the highs a lows of David's life. This picture book shows what the heart of a world changer looks like. David was selected to be king of Israel not because he was strong and mighty but because of his heart. David was willing to take on Goliath because he had a courageous heart. Even though David made some mistakes he had a repentant heart. At the end of David's life he was know for being a man after God's own heart. David truly had the heart of a world changer.

» Have you read this book? We'd like to know what you think about it - write a review about World Changer King David book by Philip Heider and you'll earn 50c in Boomerang Bucks loyalty dollars (you must be a Boomerang Books Account Holder - it's free to sign up and there are great benefits!)


A Preview for this title is currently not available.
More Books By Philip Heider
View All