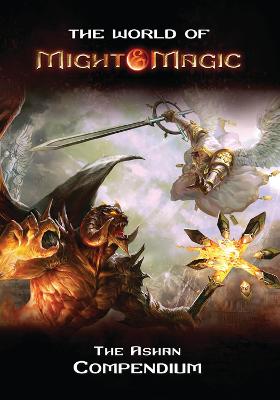 Description - The World of Might and Magic by Ubisoft

The Heroes of Might and Magic compendium is a lavishly illustrated, hardback guide to the world of Ashan, the setting for many years of Might and Magic games. Featuring exclusive artwork, stories, and fun facts, much of the content from the book is drawn directly from the Developer's Bible, the internal documents used by the game designers to keep track of timelines and plot developments. The book is divided into sections, examining the nine key factions, their history, abilities, rulers and major strengths and weaknesses. Also included is a history of the world of Ashan, presented as a timeline that covers all of the major events in the world's history. This book is a complete guide to the world of Ashan, its gods, its people, and its history.

Buy The World of Might and Magic by Ubisoft from Australia's Online Independent Bookstore, Boomerang Books.

Book Reviews - The World of Might and Magic by Ubisoft

» Have you read this book? We'd like to know what you think about it - write a review about World of Might and Magic book by Ubisoft and you'll earn 50c in Boomerang Bucks loyalty dollars (you must be a Boomerang Books Account Holder - it's free to sign up and there are great benefits!)

Ubisoft Entertainment is one of the world's largest independent videogame developers worth an estimated billion euros. Founded in France in 1986, Ubisoft now operates studios around the world and have produced and distributed some of the most successful videogames made, including the Assasin's Creed franchise, Prince of Persia games (since 2000), the Far Cry franchise, the IL-2 franchise, the Just Dance series, Myst, No More Heroes, Rayman and all of the games inspired by/ written by Tom Clancy, including Splinter Cell games, Rainbow Six games and Ghost Recon games. Heroes of Might and Magic was acquired by Ubisoft in 2003 at a cost of $1.3 million. A MMO based on the universe is currently in a soft-launch beta stage.

A Preview for this title is currently not available.
More Books By Ubisoft
View All