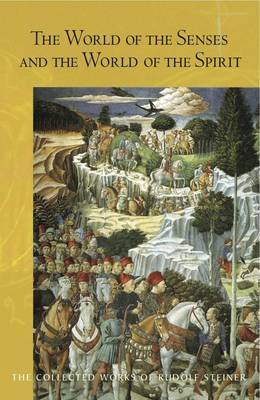 The World of the Senses

And the World of the Spirit

Description - The World of the Senses by Rudolf Steiner

'When we consider the plant world in all its greenery, or the stars with their golden glory; when we look at all this without forming any judgement from within ourselves but instead permit the things to reveal themselves to us...then all things are transformed from what they were in the world of the senses into something entirely different - something for which no word exists other than one which is taken from our very life of soul...' - Rudolf Steiner One of Rudolf Steiner's most fundamental objectives was to show how the spiritual world connects to and penetrates the material world. In doing so, he was pioneering a modern form of Rosicrucianism - countering traditional religious conceptions (that spirit and matter are polar opposites) as well as contemporary materialistic science (that ignores the existence of spiritual phenomena altogether). In this concise series of lectures, Rudolf Steiner shows how the human senses reveal the mysterious world of the will, which is at once a spiritual and physical phenomenon. The senses act as a portal connecting our physical and etheric bodies with what Steiner refers to as worlds of 'all-pervading will' and 'all-pervading wisdom'.
He elaborates this theme, giving some unexpected and delightful insights into the senses of hearing and sight, and in particular how we experience colour. Steiner suggests that divine spiritual beings had different intentions for the formation of physical human beings, but that adversary powers caused disruption, leading to a more materialized constitution. He describes disorders in the connections between the human physical, etheric, astral and ego bodies, and the ill effects of one aspect overpowering the others. He gives insight into human glandular secretions, and why we need to eat and digest - also connected to the intervention of adversary beings. Among the many other themes tackled here, Rudolf Steiner describes the transformation of the human senses and organs, giving special consideration to the function of the larynx, which in future times will develop a special kind of reproductive power.

Buy The World of the Senses by Rudolf Steiner from Australia's Online Independent Bookstore, Boomerang Books.

Book Reviews - The World of the Senses by Rudolf Steiner

» Have you read this book? We'd like to know what you think about it - write a review about World of the Senses book by Rudolf Steiner and you'll earn 50c in Boomerang Bucks loyalty dollars (you must be a Boomerang Books Account Holder - it's free to sign up and there are great benefits!)

Rudolf Steiner (1861-1925) called his spiritual philosophy 'anthroposophy', meaning 'wisdom of the human being'. As a highly developed seer, he based his work on direct knowledge and perception of spiritual dimensions. He initiated a modern and universal 'science of spirit', accessible to anyone willing to exercise clear and unprejudiced thinking. spacer spacer From his spiritual investigations Steiner provided suggestions for the renewal of many activities, including education (both general and special), agriculture, medicine, economics, architecture, science, philosophy, religion and the arts. Today there are thousands of schools, clinics, farms and other organizations involved in practical work based on his principles. His many published works feature his research into the spiritual nature of the human being, the evolution of the world and humanity, and methods of personal development. Steiner wrote some 30 books and delivered over 6000 lectures across Europe. In 1924 he founded the General Anthroposophical Society, which today has branches throughout the world.

A Preview for this title is currently not available.
More Books By Rudolf Steiner
View All

Care for the Soul: Between Body and Spirit - Psychotherapy Founded on Anthroposophy
$30.59 $33.99

How the Spiritual World Projects into Physical Existence
$35.09 $38.99