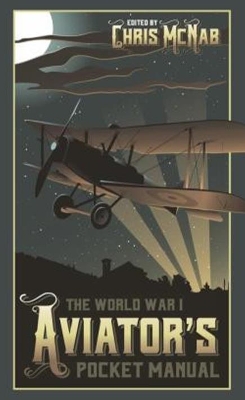 This pocket manual opens up the world of the Great War aviator, with extracts and images from WWI training manuals for pilots, with modern introductions. Aviation was still in its infancy when World War I broke out. The first men to take to the skies above the battlefield undertook reconnaissance. Pilots and observers soon branched out into primitive bombing attempts, and attacking enemy aircraft when they came into contact. Nascent air forces produced manuals to help these pioneers as they took warfare into a new dimension. Pulling together information from British manuals such as A Few Hints for the Flying Officer and Practical Flying, as well as American, German and French training guides, this pocket manual shows what type of information the pilots were given. From the basics of how to care for, start, and fly an aircraft, through tactics and strategy in the air, identifying whether vehicles below were friend or foe, interacting with mechanics, and coordinating with army or naval forces. This fascinating time capsule opens up the world of the Great War aviator. With introductions to the manuals by Chris McNab, setting them in context and providing background. AUTHOR: Chris McNab is an acclaimed writer of military history. He is the author of more than 50 books including A History of the World in 100 Weapons (2014), Battle Story: Passchendaele 1917 (2014) and The World War I Story (2011). Chris has also written extensively for major encyclopedia series, magazines and newspapers. 40 b/w images and photographs

» Have you read this book? We'd like to know what you think about it - write a review about World War I Aviator's Pocket Manual book by Chris McNab and you'll earn 50c in Boomerang Bucks loyalty dollars (you must be a Boomerang Books Account Holder - it's free to sign up and there are great benefits!)

World's Worst Historical Disasters: Natural and Man-made Catastrophes from the Ancient World to the Present Day
Available, ships in 8-11 days
$32.95 $36.61