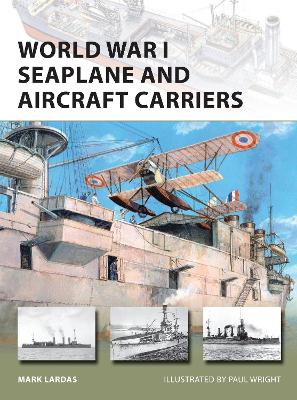 In 1910 the first aircraft was successfully launched from a small wooden platform on a stationary ship. Just four years later, seaplane-carrying warships were being used to launch the first naval air raids, and by 1918 the first aircraft carrier to feature a full-length flight deck was in service. High quality artwork and historical photographs help author Mark Lardas tell the fascinating story of the pioneering years of naval aviation, covering such historic clashes as the Japanese siege of Tsingtao, the British raid against German Zeppelin bases at Cuxhaven and the Battle of Jutland, which saw the first airplane take part in a naval battle. Through detailed analysis he explores their development from hastily adapted merchant ships to the launch of HMS Argus, the first aircraft carrier to have a full-length flight deck, and shows how they paved the way for the aircraft carriers of the future.

» Have you read this book? We'd like to know what you think about it - write a review about World War I Seaplane and Aircraft Carriers book by Mark Lardas and you'll earn 50c in Boomerang Bucks loyalty dollars (you must be a Boomerang Books Account Holder - it's free to sign up and there are great benefits!)

Mark Lardas holds a degree in Naval Architecture and Marine Engineering, but spent his early career at the Johnson Space Center doing Space Shuttle structural analysis, and space navigation. An amateur historian and a long-time ship modeler, Mark Lardas is currently working in League City, Texas. He has written extensively about modeling as well as naval, maritime, and military history. Paul Wright has painted ships of all kinds for most of his career, specializing in steel and steam warships from the late 19th century to the present day. Paul's art has illustrated the works of Patrick O'Brian, Dudley Pope and C.S. Forester amongst others, and hangs in many corporate and private collections all over the world. A Member of the Royal Society of Marine Artists, Paul lives and works in Surrey.

A Preview for this title is currently not available.
More Books By Mark Lardas
View All