The Medal of Honor is the highest award for valor in action against an enemy force that can be awarded to personnel in the United States' Armed Forces. It was introduced during the American Civil War and was first awarded on 25 March 1863. Since then 3,456 Medals of Honor have been awarded. This title is the first of two titles looking at the recipients of the Medal of Honor during World War II. It covers the Navy and Marine Corps winners (who received a total of 139 awards during WWII - including one to the Coast Guard) in all theaters of war, from the attack on Pearl Harbor in 1941 to the brutal fighting on Iwo Jima in 1945. 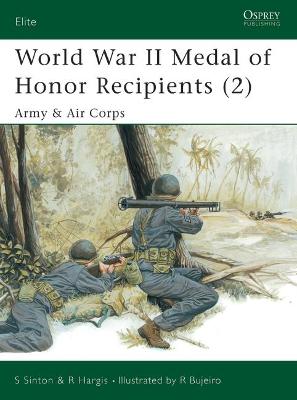 » Have you read this book? We'd like to know what you think about it - write a review about World War II Medal of Honor Recipients book by Robert Hargis and you'll earn 50c in Boomerang Bucks loyalty dollars (you must be a Boomerang Books Account Holder - it's free to sign up and there are great benefits!)

Robert Philip Hargis gained a BA in History from California State University San Bernadino. He currently works as a High School teacher, teaching US History and Western Civilization. A militaria collector for over 25 years, he also has a close involvement in living history presentations. He is married with two children, and lives in California. Ramiro Bujeiro is an experienced commercial artist who lives and works in Buenos Aires, Argentina. His professional background includes many commissions as a figure illustrator and strip cartoonist for clients all over Europe and the Americas, including many years' work for IPC Magazines in Great Britain. His main interests are the political and military history of Europe in the first half of the 20th century.

A Preview for this title is currently not available.
More Books By Robert Hargis
View All