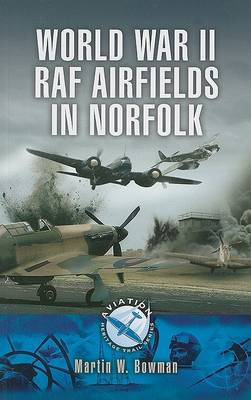 As part of the "AHT" series, this book covers airfields in Lincolnshire, Norfolk, Yorkshire and Northamptonshire. 12 Group was formed in 1937 within Fighter Command to become responsible for aerial defence of the industrial Midlands. During World War Two, this group was the second most important fighter group and as such, it received it's fair share of attacks from the German Luftwaffe throughout the war. As well as regional defence, 12 Group were also supposed to fly cover for 11 Group airfields during the Battle of Britain. The airfields and other places of interest include Digby, Hibaldstow, Kirton on Lindsey, Coltishall, Matlask, Swanton Morley, Catterick, Church Fenton, Clifton, Hutton Cranswick and Wittering. This book looks at the history and personalities associated with each base, what remains today and explores the favourite local wartime haunts. Museums and places that are relevant will also be described and general directions on how to get them included. AUTHOR: Martin Bowman is one of Britain's leading aviation authors and has written many books on World War II aviation history. He lives in Norwich in Norfolk and intimately knows every place of interest within the locality. >> 60 photos and maps

» Have you read this book? We'd like to know what you think about it - write a review about World War Two RAF Airfields in Norfolk book by Martin Bowman and you'll earn 50c in Boomerang Bucks loyalty dollars (you must be a Boomerang Books Account Holder - it's free to sign up and there are great benefits!)