The World Without Us

Description - The World Without Us by Mireille Juchau

It has been six months since Tess Muller stopped speaking. Her silence is baffling to her parents, her teachers and her younger sister Meg, but the more urgent mystery for both girls is where their mother, Evangeline, goes each day, pushing an empty pram and returning home wet, muddy and dishevelled.

Their father, Stefan, struggling with his own losses, tends to his apiary and tries to understand why his bees are disappearing. But after he discovers a car wreck and human remains on their farm, old secrets emerge to threaten the fragile family.

One day Tess's teacher Jim encounters Evangeline by the wild Repentance River. Jim is in flight from his own troubles in Sydney, and Evangeline, raised in a mountain commune and bearing the scars of the fire that destroyed it, is a puzzle he longs to solve.

As the rainforest trees are felled and the lakes fill with run-off from the expanding mines, Tess watches the landscape of her family undergo shifts of its own. A storm is coming and the Mullers are in its path.

Sometimes we must confront what has been lost so that we can know the solace of being found.

The World Without Us is a beautifully told story of secrets and survival, family and community, loss and renewal.

Buy The World Without Us by Mireille Juchau from Australia's Online Independent Bookstore, Boomerang Books.

Other Editions - The World Without Us by Mireille Juchau 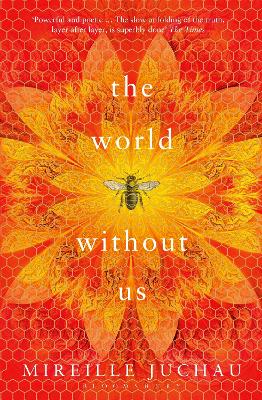 Book Reviews - The World Without Us by Mireille Juchau

» Have you read this book? We'd like to know what you think about it - write a review about World Without Us book by Mireille Juchau and you'll earn 50c in Boomerang Bucks loyalty dollars (you must be a Boomerang Books Account Holder - it's free to sign up and there are great benefits!)

Mireille Juchau is a critically acclaimed Australian novelist. The World Without Us is her third novel, published by Bloomsbury in Australia, the UK and forthcoming in the US. The World Without Us has won The Victorian Premier's Literary Award 2016, is shortlisted for The Stella Prize 2016, and longlisted for the Miles Franklin Literary Award 2016 and the Australian Book Industry Awards 2016. Mireille's second novel, Burning In, was shortlisted for four awards including the Prime Minister's Literary Award 2008. Her debut, Machines for Feeling, was shortlisted for the 1999 Vogel/Australian Literary Award. Described by The Guardian UK as "a writer of great poetic power", Mireille is also known for her short fiction, essays and reviews and her international award winning play, White Gifts, was performed and published in the US. @MireilleJuchau mireillejuchau.com